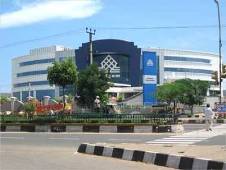 Gupta was produced in the Nampally court, which remanded him to judicial custody till November 26.

With Gupta's arrest, the number of those arrested in connection with the Satyam case has gone up to 10. These include Satyam founder B Ramalinga Raju, his brother and former managing director B Rama Raju, former chief financial officer Srinivas Vadlamani, and Price Waterhouse auditors Goplakrishna and Srinivas Talluri.

The CBI, which has already filed its chargesheet, is preparing to file a supplementary chargesheet. It has time till the end of this month for this.

Ramalinga Raju was arrested on January 7 after he confessed to inflating the balance-sheet figures. The CBI filed a chargesheet against Raju and other accused before the XIV additional chief metropolitan magistrate court on April 7.

The CBI said there were 433 witnesses, 1,532 documents and 62 material objects in the case. The initial chargesheet ran into 65,000 pages.

In response to the CBI request and as well the recommendation of the Andhra Pradesh high court, the state government has decided to set up a special court to try the case. It will be headed by an additional chief metropolitan magistrate.