Infosys identified 36 skills that were important and created learning pathways.

For Krish Shankar, executive vice-president & group head of human resource (HR) development at Infosys, the defining moment of the pandemic on the HR department has been the importance that reskilling and learning have managed to get.

For Infosys, the focus on reskilling started three to four years back as business saw a shift towards digital, and the pandemic has really brought the importance of reskilling to the fore.

“In the past, certification courses or taking up an e-learning course was just a way towards promotion, and was not taken too seriously.

"That has been changing in the last 2-3 years, and the pandemic has accelerated this trend.

"Today, 80 per cent of our people in our new digital businesses are in-house talent,” said Shankar.

Shankar also says that the shift in business revenue has made employees realise the importance of reskilling.

In 2018, digital businesses contribution to the revenue was 25-27 per cent, at present it is 50 per cent and that business is growing 40 per cent.

“People can see where the growth is coming from.

"They have to reskill to really be a part of this growth.

"One way to make them part of this is incentives, the second is about creating technology and platforms,” he added.

To begin with, Infosys identified 36 skills that were important and created learning pathways.

In addition to these courses, employees also had to get certification.

“Once they got the certification, they would be redeployed and needed to work in that position for a period of six months to get a skill tag.

"This allows them to be called a cloud architect or digital engineer, and once that is done, they get a skill bonus once a quarter,” said Shankar.

Along with this, the company also added another parameter for employees to be evaluated upon, which is called the Digital Quotient (DQ).

DQ is more about getting points and how employees keep on improving this so that they get a faster roadmap to their career growth.

Infosys’ focus on reskilling and training started three years back, when it began a journey on being a Live Enterprise, or an agile company.

It created the LeX platform that allows its employees to accelerate their talent transformation journey.

Almost 90 per cent of employees at Infosys are learning though LeX, with an average daily user of 25,000.

“We have been on this journey for a few years but the pandemic has accelerated this manifold,” added Shankar.

This is also evident in the way the company has been hiring freshers.

Unlike in the past, where the bulk of the engineers would be hired in the Rs 3.5-3.7 lakh range, now the focus is different.

“Today, we have got a large number of people who join as power programmers and get double the entry-level salary or those who join as digital engineers and again get a higher salary.

"Those who still get in the normal range can always use the bridge programmes made available to them to enhance their skills and get into better roles,” said Shankar.

Shankar added that one of the employee-value propositions (EVPs) for people joining the company is that their careers will never stand still.

“Right from the time they start and as they grow, we want to say that there are enough career opportunities,” he said.

The impact of this change for Infosys has meant certain things; the work from anywhere/home that has pushed the envelope on flexibility; two, the need for a digital ecosystem.

A digital interface for the organisations has become important as that defines how it will engage digitally and create a digital experience.

“This pandemic also made the leadership more accessible to employees to connect.

"We have also been investing a lot in working with managers and the leadership to understand what is needed from them that will enhance their role and also create a culture,” said Shankar.

“This is an evolving thing and we will have to watch the situation and make managers and leaders sensitive to it.

"We have to understand the triggers and give the empowerment to the teams to decide what works for them best. We have found that this approach works best,” he said.

Shankar was also of the opinion that there will be a few models coexisting: There will be hybrid workplaces, some employees may keep on working from home and some may be coming to the office.

At present, the HR team is in office twice a week and the finance team meets once a week.

“I think the whole ecosystem around people has also got to work for them to come back to offices, like schools and day-care centres have to open.

"Over time, more people will come back to work, but we will wait for a few quarters and then take a call,” added Shankar. 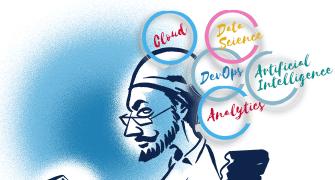