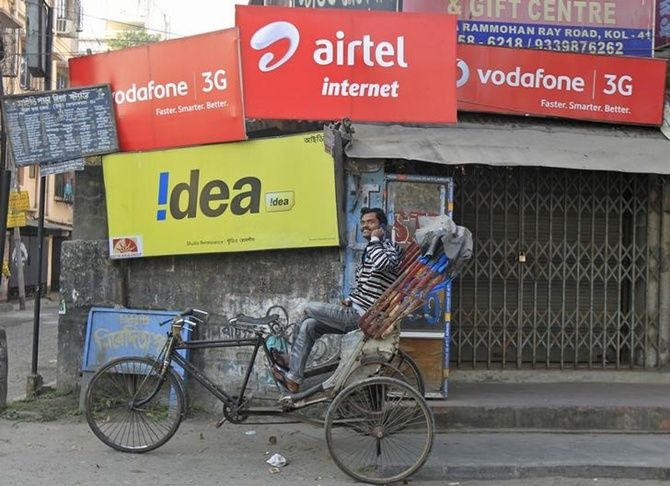 Image: A rickshaw puller speaks on his mobile phone as he waits for customers in front of advertisement billboards belonging to telecom companies in Kolkata. Photograph: Rupak De Chowdhuri/Reuters

The fear among investors is that the companies' balance sheets may now be under pressure.

The government had raised a record $1.07 trillion rupees ($17.07 billion) by the end of bidding on Tuesday in an auction that began on March 4.

That's almost a third more than what the government had forecast for the entire duration of the auction, which is set to end this week. Analysts estimate most of the bids were from the country's biggest players.

For the government, the money raised will help plug the fiscal deficit. For India's wireless carriers, the auction is the only way to renew expiring 20-year leases and build the extra capacity needed ahead of an anticipated surge in mobile data consumption as more Indians use mobile phones to go online.

But whether the carriers, including Bharti Airtel Ltd and Idea Cellular Ltd, can recoup the huge sums of money spent on bandwidth will depend on the moves of Reliance Industries Ltd , controlled by billionaire Mukesh Ambani.

"The point is that the operators have no choice but to bid to retain spectrum," said Aneesh Srivastava, chief investment officer at IDBI Federal Life Insurance. "My concern is whether the companies have got pricing power (to repay the debt incurred) or not."

Fierce bidding in the premium 900 megahertz band in particular, where most of the top companies see some licenses expiring this year, is set to prove a heavy cost for wireless carriers, already among the most leveraged among Asian rivals.

Idea, for instance, is expected to hold on to 900 Mhz spectrum in nine regions which account for 72 percent of its revenue. But analysts estimate that to renew all its licenses it will have to spend close to 300 billion rupees ($4.8 billion).

The mobile carriers participating in the auction are not allowed to speak to the media during the sale.

Among the companies in the auction are the India unit of Vodafone Group PLC and Reliance Communications Ltd, controlled by Mukesh Ambani's brother Anil. Final allocations will be confirmed at a later date.

"It's going to be very difficult for companies to make any dramatic changes in tariffs, because the fact is that companies face a very competitive market," said Mahesh Uppal, director of telecom consultancy firm Com First.

Shares in Idea and Bharti have climbed 14.6 percent and 10.7 percent, respectively, since the auctions started, as investors bet that short-term pain to hold on to key licenses will mean long-term gain.

"Maybe their debt levels will be high for two years, but beyond (that) we start to see them stabilising, once the revenue starts to grow," said an industry consultant who is advising one of the bidding companies.

He said companies could see "significantly" more data revenues after 2017. "Prices will go down but the usage and adoption will go up substantially," he said.