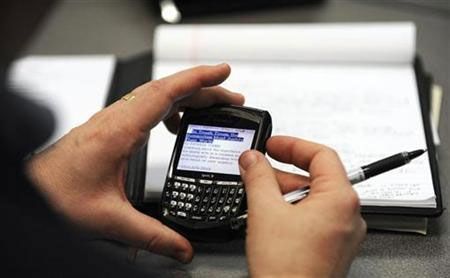 Aggressive bidding by mobile phone operators including Bharti Airtel Ltd and Idea Cellular Ltd for mobile airwaves, betting on a surge in data usage, is set to see the government raising record revenue from the auction.

The government had received bids worth about Rs 940 billion ($15 billion) by the end of auctioning on Monday after five days of bidding, according to a notification from the Department of Telecommunications.

At this pace, revenue from the auction of mobile airwaves will break its record of 1.06 trillion rupees logged in 2010, analysts and consultants said, as carriers seek to expand offerings and hold on to airwaves in some key regions.

New Delhi is also set to top its target of raising at least $13 billion.

"I think some of the companies still have an additional 50 billion to 70 billion rupees to play and we will see more of that money being deployed in the coming days," said Pankaj Agrawal, director at telecoms advisory firm Capitel Partners.

Bidding has been especially competitive in the premium 900 mega-hertz band, with provisional winning bids rising by an average of 87 percent over reserve prices across zones by the end of bidding on Monday.

Final spectrum allocations to the mobile phone operators will take place after March 26 when the Supreme Court issues its ruling on multiple cases questioning the auction guidelines and criteria.

In the latest auction round, the stakes are especially high for Idea and Reliance Communications, which face the expiry of airwaves in some key operational zones by end of this year and need to retain bandwidth through the bidding process.

"Initial expectation was that the competitive intensity would be high in RCom (Reliance Communications) circles plus a few markets for Idea where they do not have backup spectrum," said an industry consultant.

"We're also seeing intensity going up in circles where only Vodafone is up for renewal and that is increasing the competitive intensity substantially," said the consultant declining to be named as he was advising one of the bidders.