News
Business
Movies
Sports
Cricket
Get Ahead
Money Tips
Shopping
Sign in  |  Create a Rediffmail account
Rediff.com  » Business » Cisco's Chambers to step down as CEO, Robbins to take over

Cisco's Chambers to step down as CEO, Robbins to take over

After Oracle's Larry Ellison, Chambers became the second high-profile US technology executive to step aside from the top job in the past eight months 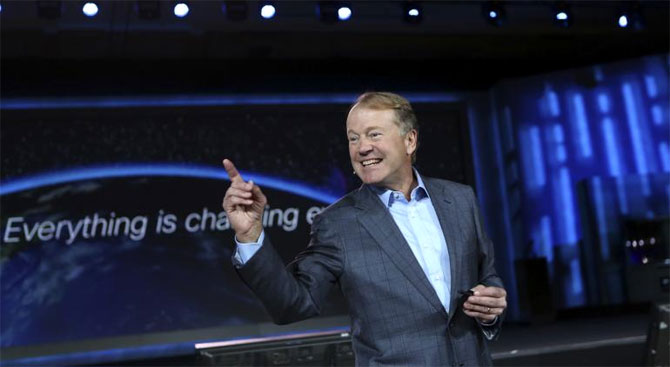 Cisco Systems Inc Chief Executive John Chambers will step down in July after 20 years at the helm of the network equipment maker, a symbol of the dot.com stock boom 15 years ago now struggling to boost its bottom line in the era of cloud computing.

Company veteran Chuck Robbins (bottom, left), 49, will take over as CEO while 65-year-old Chambers, one of the longest-serving leaders of a Silicon Valley company, will become executive chairman and continue to be chairman, the company said on Monday.

Wall Street analysts said a change was expected and could signal a refocusing of Cisco, which acquired dozens of companies under Chambers but has failed to make great headway outside its core networking business.

"In many cases where the CEO has been very acquisitive, the next guy pares down and refocuses the company, and that is what I would be expecting with this change," said Kim Forrest, an analyst at Fort Pitt Capital Group in Pittsburgh. 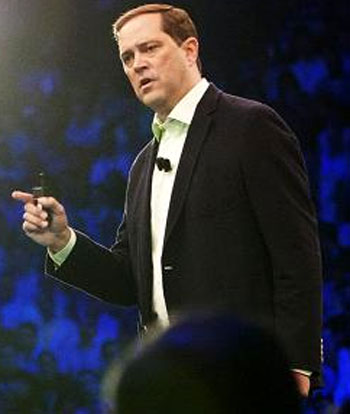 The company became a stock market sensation at the height of the technology boom in March 2000 when its market value passed $600 billion and briefly surpassed that of Microsoft Corp.

Chambers never managed to revive those glory days despite forays into consumer electronics and other areas. Cisco's market value is now about $150 billion, and its annual operating profit is around where it was five years ago.

Robbins joined Cisco in 1997 and became a board member on Friday.

His latest role has been senior vice president of worldwide operations, running global sales for the company. Analysts hope Robbins' elevation will mean a renewed focus on sales.

"We like that Cisco is appointing someone as CEO that has a strong sales background, and we expect the employee base to be very supportive of the appointment," said Tim Long, an analyst at BMO Capital Markets.

Cisco has been looking for a new CEO for the past 16 months, board member Roderick McGeary wrote in a company blog post detailing the hiring process.

Chambers is the second high-profile US technology executive to step aside from the top job in the past eight months. In September, database software maker Oracle Corp's CEO, Larry Ellison, announced his plan to become executive chairman.

Analysts and investors had long expected an announcement that Chambers would hand over the reins to a younger leader.

Chambers has increased Cisco sales to about $48 billion from $1.2 billion since he became CEO in 1995.

© Copyright 2020 Reuters Limited. All rights reserved. Republication or redistribution of Reuters content, including by framing or similar means, is expressly prohibited without the prior written consent of Reuters. Reuters shall not be liable for any errors or delays in the content, or for any actions taken in reliance thereon.
Related News: Cisco, CEO, Chuck Robbins, Larry Ellison, BMO Capital Markets
SHARE THIS STORY
Print this article