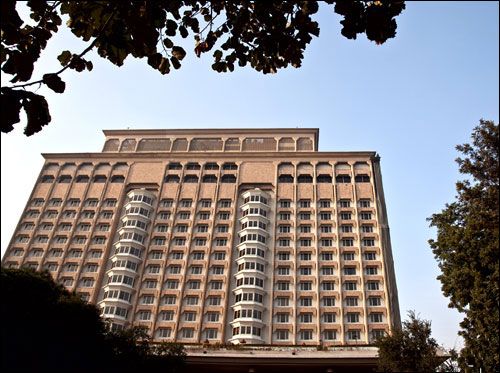 The New Delhi Municipal Council on Thursday decided to auction off one of the most luxurious properties it owns -- the Taj Mansingh hotel -- and also cancelled Le Meridien Hotel’s licence over dues of Rs 523 crore.

The decision to auction Taj Mansigh brings to an end a six-year-old tussle between the NDMC and Tata Group, which has operated the landmark property for nearly four decades.

Although the Centre had cleared the decks for the auction two years ago, no action was taken as the civic body was entangled in legal battles with Tata’s Indian Hotels Company Limited, which has been operating the iconic hotel on Mansingh Road since 1978.

The long-pending decisions on Taj and Meridien were announced by Chief Minister Arvind Kejirwal after a special council meeting of NDMC.

The council also decided that Tata will not be given the right to first refusal, which means they will have to contest with other bidders when the auction takes place. NDMC did not say when the auction will be held.

IHCL’s 33-year lease of the Taj hotel expired in 2011 and it was given nine temporary extensions on various grounds.

NDMC, which works under the administrative control of the Union home ministry, got the nod to auction the hotel in March 2015.

At the time, the civic body had also selected SBI Cap, which was the Centre’s advisor for coal blocks auctions, to be its transaction advisor for the auction. However, the process got delayed when Tata moved the Delhi high court.

According to the minutes of Thursday’s meeting, the body decided that the best available method for NDMC “to obtain the fair market value of rental of the said property in a fair and transparent manner is to opt for e-auction of the premises.”

“The right of first refusal to the Tata’s will not be in public interest and would not yield a correct and fair price. The Supreme Court will be apprised of the decision
accordingly,” a senior NDMC official said.

An IHCL spokesman refused to comment, saying “the matter is subjudice”.

The civic body also decided to cancel the licence of Le Meridien, another posh hotel in the Lutyens’ Delhi.

“The council decided that the licence of the hotel be terminated due to non-payment of licence fee worth Rs 523 crore and the Delhi high court will be apprised accordingly, keeping in view the gross abuse of the process of law by the hotel,” the NDMC official said.