Most investors are familiar with Systematic Investment Plans (SIPs), where you invest a fixed amount every month in mutual funds to generate a corpus over the long term.

However, not many are as well aware of the nuances of a close cousin called the Systematic Withdrawal Plan (SWP).

In the latter, you withdraw a fixed amount every month from the corpus to generate a regular income. SWPs can come in handy for retirees.

In an SWP, a few units are sold automatically from your holdings in a mutual fund on a specific date every month.

You decide the amount you wish to receive each month.

The number of units to be redeemed is calculated based on the NAV on the SWP date.

Besides monthly, you can also choose weekly, quarterly or annual frequency.

SWP is an option worth exploring for those who want a regular income.

If you invest in a fixed deposit or an annuity scheme for regular income, the interest income or annuity payment will be taxed at the marginal income tax rate.

However, in case of an SWP, your income is on account of redemption of units.

Hence, capital gains tax will apply, which can be favourable if you have held the units for the long term.

Short-term capital gains tax for equity funds is 15 per cent, and for debt funds, it's clubbed with the investor's income.

If an individual sells debt fund units under an SWP after holding them for over three years, he will get a beneficial tax treatment.

Hence, market volatility is the friend of long-term investors.

In an SWP, rupee cost averaging works in reverse.

Due to this, your portfolio can deplete much faster than expected.

Let's try to understand with the help of an example (please see table).

Suppose you invested Rs 120,000 in a Nifty index fund on March 1, 2015, that replicates the performance of the Nifty. 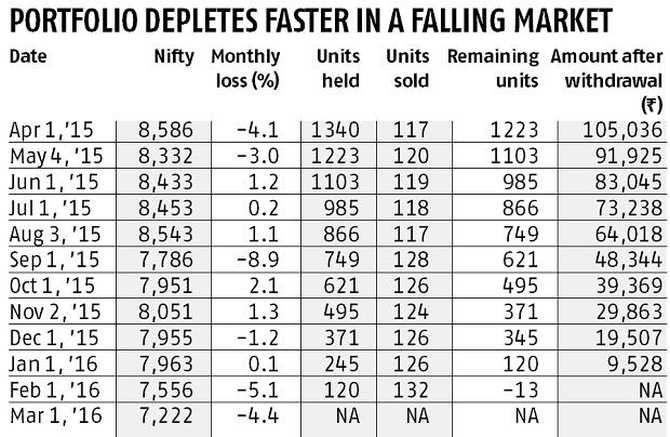 The NAV of the fund is the value of the Nifty divided by 100.

Even if you keep this amount in a savings bank account, you will have some change left after withdrawing 12 instalments.

To sum up, the cash position is quite comfortable.

In the example, if the markets were closed on a particular day, the NAV for the next working day is taken.

The impact of exit load and capital gains tax is not considered.

Let's see how you would have fared.

In this case, your corpus doesn't even last for 12 months. It gets over within 11 months.

Had you kept this corpus in a liquid fund with a post-tax return of around 5 per cent, you could have easily withdrawn 12 instalments of Rs 10,000 and still be left with a little over Rs 3,500.

Who was the culprit?

Market volatility and your luck. And you can't control either.

You started on a bad note. Your corpus went down almost 4 per cent before you made even your first withdrawal.

In a portfolio from which you are withdrawing money, as in this example, the sequence of returns is quite important.

If you get a bad sequence of returns at the beginning, it may be difficult to recover (even if you get good returns later on).

If you are planning to generate income using SWP (from an equity fund) during retirement, do consider this aspect.

At the beginning, you had Rs 120,000 for 12 months and the situation was comfortable.

You can notice how you have to redeem more units to maintain the same level of income as the market goes down.

Ideally, you would want to do the reverse.

If the markets had remained flat during the period, you would have redeemed 111.64 units per month.

In reality, you had to redeem much more.

I chose the period to suit my argument. But changing the period will not change the conclusion.

You don't know upfront how the markets will behave over the next 12 months. It is quite possible that the markets would have done well during the period.

In that case, not only would your corpus have lasted 12 months, you would also have some excess at the end of this period.

However, when you plan, you do not only consider the optimistic scenario.

That is not planning, that is hope. You have to be prepared for adverse events.

Choose the right instruments for SWPs.

Avoid an SWP in an equity fund or an equity-oriented hybrid fund.

Do an SWP in a less volatile fund, such as a shorter-duration debt fund or a debt-oriented hybrid fund.

Move the requisite amount from an equity to a debt fund and then set up an SWP in the latter.

Also, remember that the tax treatment of debt funds becomes benign only after three years.

Hence, besides avoiding the volatility of equities, you also need to move to a debt fund at least three years in advance of your retirement to be able to enjoy the beneficial tax treatment.