Airlines in the country are expected to cut down their losses in the third quarter of this financial year, thanks to a consistent increase in passenger numbers and the consequent surge in yields. 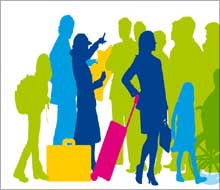 The airlines have also been successful in bringing down their costs by 12 per cent. "The industry is seeing such growth in load, and also yields, only after around five years. This clearly is a sign of turnaround. The operational cost of the airlines has also come down by 12 per cent due to some efficiency enhancement measures," said IDFC-SSKI managing director Nikhil Vora.

The aviation turbine fuel price, which constitutes 40 per cent of an airline's operational cost, is also less than it was in the same quarter last year.

Industry analysts feel that the bad times for the airlines are over and they will continue to grow in the coming months. "The passenger numbers for January are also looking the same as December, which is huge as December is a peak-season month," said Bhawna Agarwal, head of online sales at yatra.com, an online travel portal.

Others also see a threat to the growth if the crude prices rise or the airlines increase capacity. "The growth in the passenger numbers has been decent ...but what needs to be under control is the crude price and increase in capacity by the airlines," said Mahantesh Sabard, senior analyst at Centrum, a financial services firm.