Commencement of direct export of jewellery made of precious metals and stones to Pakistan is likely soon.

Despite similarities in culture, ethnicity and choices in this regard, the annual jewellery trade between the two countries stood at Rs 88.5 crore (Rs 885 million) in 2011-12.

While India exported cut and polished diamonds and jewellery worth Rs 87 crore (Rs 870 million), such imports to India constituted just about Rs 1.5 crore (Rs 15 million). Since there is no direct access to each other's markets, trades are put through via Dubai, Sri Lanka and other Asian countries.

A 12-member Indian delegation led by Sanjay Kothari, vice-chairman of the apex trade body, the Gems & Jewellery Export Promotion Council (GJEPC), visited Pakistan on June 7-12 and met a number of traders and retailers.

They also met Prime Minister Yousuf Raza Gilani and discussed growth in jewellery trade. Kothari says Gilani agreed to look into tax and visa problems faced by the two countries' businesspeople in being able to freely access each other's markets.

"We can tentatively say that direct jewellery export to Pakistan might commence in a couple of months," said Kothari.

While Pakistan would be a new destination for India's jewellery exports (where a lot of Indian cuts and designs are widely accepted), for India the import of some classic colour gemstones would become easier. Pakistan's jewellery market is estimated at $12 billion, while India's annual jewellery exports are $32-33 billion.

"We suggested the Pakistani government look into the taxation part, through which they generate just a few lakhs of rupees. Also, value added tax (VAT) is substantially higher, which if they reduce would boost India's direct export exponentially," said Kothari. In Pakistan, the government has levied five per cent on income tax in addition to 19 per cent of VAT on the trade. In India, VAT is only one per cent.

Direct access to Pakistan's jewellery markets would partly compensate the export deficit to European countries, significantly down due to the ongoing economic crisis there. Also, Pakistan has a good amount of reserves of colour gemstones, which Indians may import for processing here.

About nine-tenths of all the diamonds mined in the world are processed in India. Cutting and polishing of Pak colour gemstones would help growth in India's manufacturing sector to some extent, said Rajiv Jain, chairman of GJEPC.

However, the export trade to Pakistan would be restricted to the business-to-business sector. Kothari said it would be impossible for Indian jewellery exporters to go directly to consumers as they do in other markets. Growth possibilities, Kothari said, would depend on how soon the Pak government reduced tax barriers. Good News: Jewellers to cut making charges by 25 per cent 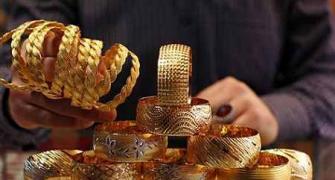 SC has no role in disqualification of PM: Pak AG