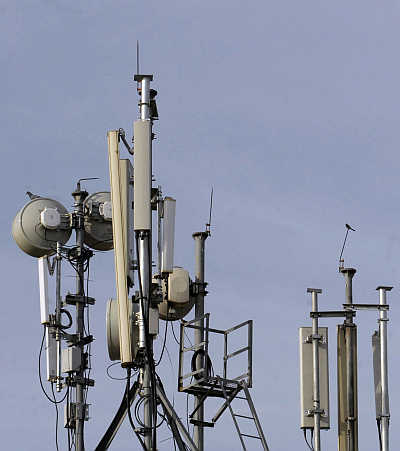 Far from benefitting consumers, the new rules on roaming charges have opened another front in the battle between large and small operators.

It was being touted as a bonanza for the over 112 million mobile customers who use the roaming facility across the country. And when the Cabinet cleared the new telecom policy last year to eventually move towards a “roaming-free regime”, telcos had hoped it would bring millions of others who kept away because of steep tariffs to join the party and talk more.

But, in a hurriedly-convened press conference on Monday, Telecom Regulatory Authority of India Chairman Rahul Khullar threw a spanner in the works by coming out with a halfway measure which has deeply divided the telcos and has killed any hope for a fall in roaming tariffs.

The big three operators - Airtel, Vodafone and Idea - who together take away 80 per cent of the roaming revenues of the industry have got what they wanted: no free roaming for the time being. And pitted against them are players like Reliance Communications who have been pushing for free roaming as it currently constitutes a minuscule portion of their earnings, hoping it will help them in generating additional revenues as consumers will now talk more. 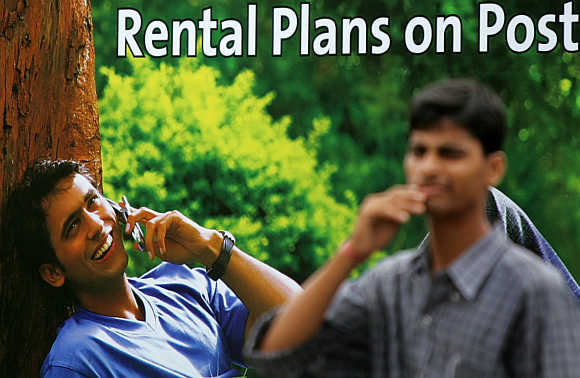 Image: A man walks past a billboard of a mobile service operator advertisement in Mumbai.
Photographs: Punit Paranjpe/Reuters

So what has Trai done? Well, Khullar has clearly said that free roaming is not practical at the moment, and he will review the decision after a year; he has given no timeline for its complete implementation. Instead, he has slashed the cap on roaming charges imposed in 2007 by 29 to 59 per cent, which he says will help in increasing competition and bringing down prices.

He has also permitted operators to charge upfront for roaming services from subscribers or offer them a fixed tariff whenever they choose to use the roaming facility. “With the caps going down I see many of the new players coming up with attractive offers. This will lead to competition amongst telcos and roaming tariffs are bound to fall,” predicts Khullar.

But Khullar’s hopes that tariffs will fall might not happen. What it has done instead is divide the industry. Telcos who have low roaming incomes say that he has merely assuaged the fears of incumbent big players who have claimed that free roaming would lead to a financial burden of over Rs 13,000 crore on the industry. They say big players have exaggerated the numbers and, based on Trai’s study, the impact is a moderate Rs 2,000 to Rs 2,500 crore (Rs 20 billion to Rs 25 billion). 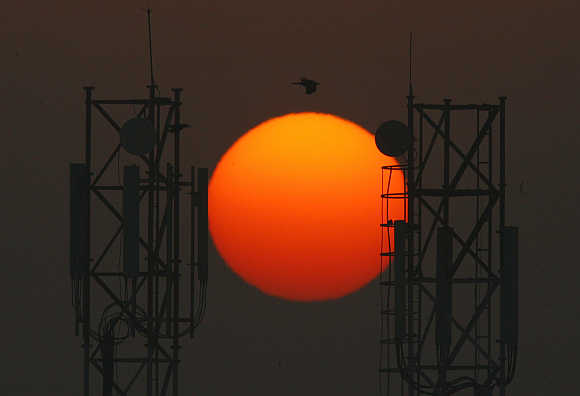 So is Trai merely protecting the big companies who earn large revenues from roaming? After all, for the three big boys roaming constitutes 10 per cent of their revenues. For the smaller players, it would not be more than 5 per cent. Post-paid customers contribute 90 per cent of the roaming revenues and bulk of them, especially the high ARPU (average revenue per user) customers, again reside with these three big players.

RCom is leading a strong attack on the big boys. Gurdeep Singh, president and chief executive (wireless division) of Reliance Communications, which gets 5 per cent of its revenues from roaming, says: “The views expressed by some operators that free roaming would adversely impact revenues is biased and wrong. Trai’s recommendation is a token reduction. Free roaming will have a positive impact on revenues as usage will increase and volumes will kick in”.

His views are endorsed by other smaller players who say that the policy is skewed against customers and in favour of a few operators. Says a senior executive of a new telco who does not want to come on record: “It’s a battle between Airtel and RCom; we are small players. But surely with free roaming, telcos like us who are not present all over India would have been able to reduce our over-dependence on competing telcos in circles we don’t operate in; these telcos dictate the terms and conditions today”. 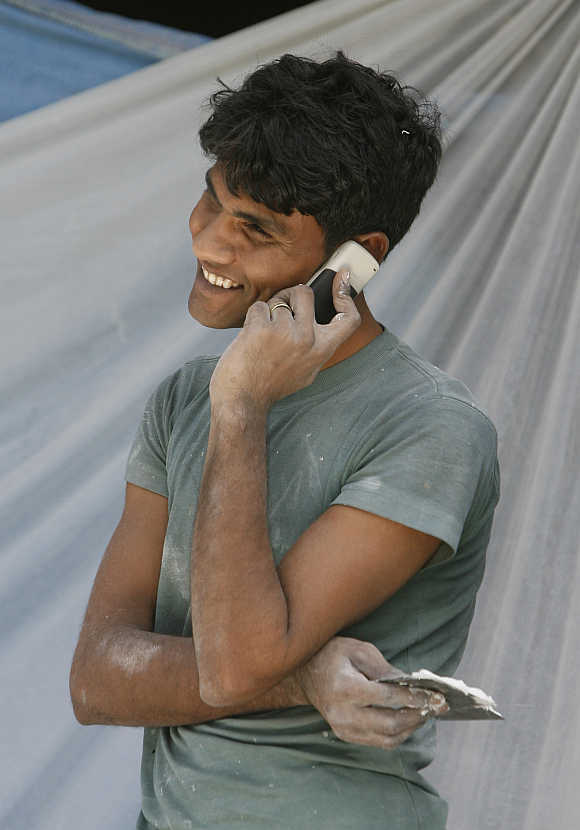 Image: A labourer talks on his mobile phone at a construction site in New Delhi.
Photographs: Adnan Abidi/Reuters

He also added that with ARPUs of less than Rs 80, his telco has just a few roaming subscribers; so it would have made additional revenues with customers talking more which it has now been deprived of.

Also, smaller telcos do not have NLD services of their own which puts them at a disadvantage with the big players who can offer outgoing roaming at cheap rates as they do not have to pay for STD carriage or termination charges within their network. However, the smaller players have to pay.

But it is also pretty clear that the big telcos which have been increasing their effective tariff realisation will drop prices. Says Rajan Matthew, director general of Cellular Operators Association of India: “Trai has tried to do a balancing act. We will see changes in the tariff plans, but they will be done smartly so that they are revenue neutral for the companies.”

Matthew admits that companies with a pan-India network will surely have an edge over their rivals who operate in a few circles as they would have to pay for NLD carriage. However, Goldman Sachs says it does not expect most telcos to reduce tariffs to meet the new guidelines. 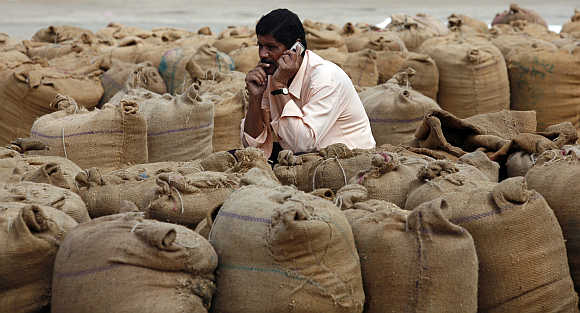 Image: A man speaks on a mobile phone amid sacks filled with wheat and rice in Ahmedabad.
Photographs: Amit Dave/Reuters

“The only exception is incoming calls (where they have to adjust tariffs downwards). As telcos would be able to charge a “one-time”fee to subscribe to special tariff vouchers, they should be able to partially offset any negative impact from incoming roaming rate cut,” says a recent report by the investment bank.

The reason for scepticism on the Trai move is understandable. Telcos, for instance, always charged much lower for roaming than what was stipulated in the caps imposed in 2007. What Trai has simply done now is to bring the caps down to the current prevailing roaming rates charged by telcos (see table). So, for instance, subscribers wanting to make outgoing STD calls had to fork out Rs 1.50 on an average per minute, even though the cap was at Rs 2.40 per minute.

What Khullar has now done is to bring down the cap at par with what telcos charge currently - Rs 1.50 a minute. However, on incoming calls telcos might have to make some cuts in tariffs. Trai has slashed roaming charges by a substantial 57 per cent to Rs 0.75 per minute. Telcos currently on an average charge Rs 1; so they have to make an adjustment in their tariffs. 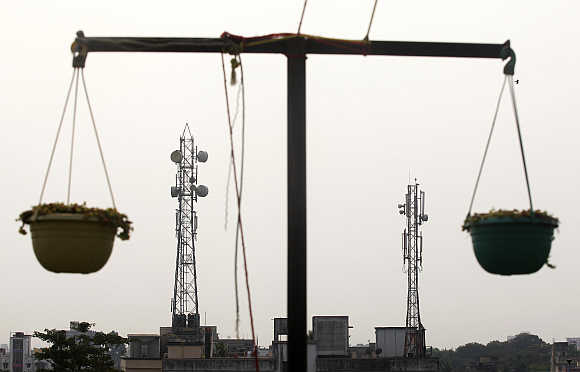 Trai has also not done anything new by allowing telcos to take upfront payments for giving roaming services either. That is because telcos were already touting such schemes even earlier. For instance, Aircel is offering a “One Nation One Rate Plan” in which you pay a one-time upfront fee of Rs 39 and get incoming calls free and pay 1 paisa per second for outgoing calls.

The offer is valid for 180 days. Even BSNL has a “Roam Free Plan” available with an upfront payment of Rs 199 with incoming free. To be fair, there have been concerns about making roaming free. Some operators say that this could have led to a massive migration of customers to circles (they would buy SIM cards of these circles) where overall tariffs are low, as roaming would be free.

So the regime is impractical to implement. But experts say this fear is misconstrued as all SIM cards need registration of the customer with documents where they reside. Two, Trai could have imposed roaming charges on incoming calls and spared outgoing calls to resolve the problem. Khullar, of course, says that he was not left with much choice. But by making a tentative move, Trai has neither benefited the consumers which is what Union Communication Minister Kapil Sibal had been touting with “free roaming” and has created yet another battleground between the big three operators and the smaller and newer players.