Earlier, India and Singapore signed ten pacts, including a joint declaration on elevating their bilateral ties to a strategic partnership. 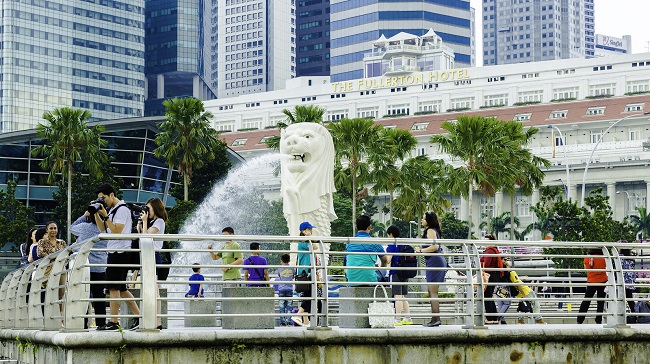 Speaking at a banquet lunch hosted for him by Singaporean Prime Minister Lee Hsien Loong, Modi said, "The Asiatic Lion can now be found only in Gujarat, but Asia's economic lion is here in Singapore."

While praising the "energy, sense of purpose and enterprise in the Singapore air", he said, "Singapore is a major partner in almost every area of India's transformation."

Modi said in his banquet address: "There can be no place like Singapore -- a symbol of aspiration for people and a source of inspiration for nations... Lee Hsien Loong's leadership has sustained the momentum of Singapore's success."

Later, Modi tweeted that he presented the Singaporean Prime Minister a reproduction of a map of the island of Singapore dating back to 1849.

"Measuring 52in x 52in and based on a survey that was done during 1842-45, the map depicts topographical details of parts of Singapore.

The map also depicts a description of various points in the vicinity of Singapore town above the level of low water spring tides," he said. The reproduction was done from the cartographic collection of the National Archives of India, New Delhi.

Earlier, India and Singapore signed ten pacts, including a joint declaration on elevating their bilateral ties to a strategic partnership, besides agreements for enhanced defence cooperation and in areas like cyber security, shipping and civil aviation.

Image: Tourists at the Merlion monument in Singapore