Only a few thousand chargers dot the Indian landscape, some in working condition, others not, with some held hostage to the power supply vagaries of local utilities, reports S Dinakar. 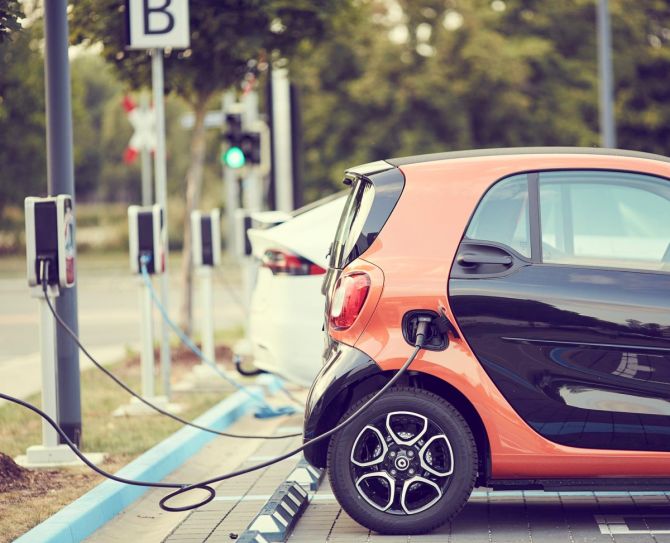 Transport minister Nitin Gadkari has frequently made ambitious announcements on the timelines for the adoption of electric vehicles (EV) in India.

The latest is a plan to eliminate sales of petrol, India's most consumed road fuel after diesel, and substitute it with greener options.

“With full faith I want to say that petrol will vanish from the country after five years. Your cars and scooters will either be on green hydrogen, ethanol flex fuel, CNG or LNG,” Gadkari said recently.

Given that comments from the government are often sounding boards rather than sound policies, and even assuming that Gadkari meant that petrol will not be used in any new vehicles by 2030 -- rather than making the fuel vanish from the country's energy landscape -- it is illustrative to look at what India's charging landscape has to offer to accelerate EV adoption in the country.

At first glance, very little, unlike the ubiquitous petrol pumps.

Only a few thousand chargers dot the Indian landscape, some in working condition, others not, with some held hostage to the power supply vagaries of local utilities. And that is coming in the way of growing EV sales, which just hit a speed bump after a spate of EV fires.

In India, Brazil and Indonesia, less than 0.5 per cent of car sales are electric compared to 9 per cent globally.

But China, a developing country, has bucked the trend.

More e-vehicles were sold in China in 2021 (3.3 million) than in the entire world in 2020, partly because the speed of charging infrastructure roll-out, backed by Beijing, was faster than in most other regions.

China, for example, has over 2 million chargers available for an EV fleet.

That's 10 per cent of its total vehicle population.

The lack of commercial viability for EV charging stations, a concern that also stretches to China and Western nations, is the main reason India's charging landscape looks puny compared to China or Nordic countries.

So a public charging station (PCS) needs to generate additional revenues from food, retail or other services -- something like a multiplex earning from food sales. But that drives up initial costs, and demands more acreage.

Though charging at home and workplace will supply much of the demand overall, PCS, especially on highways, provides the visibility for faster EV adoption, Dodda pointed out. The number of public chargers still needs to expand nine-fold and reach over 15 million units by 2030 if EVs were to account for more than 30 per cent of vehicles sold globally in 2030 (excluding two- and three-wheelers), the Paris-based International Energy Agency said. “Governments should continue to support deployment of publicly available charging infrastructure at least until there are enough EVs on the road for an operator to sustain a charging network,” the agency said.

EV charging infrastructure in India can be likened to an orphan.

Private entrepreneurs are not enthused given the lack of visible cash flows after dealing with expensive real estate, waiting at officials' doors at utilities to secure power lines, and then waiting for a vehicle to drop in.

It's a bit like Samuel Beckett's play Waiting for Godot where an entrepreneur can wait for days for vehicles to visit his charging point.

New Delhi is wary about investing or incentivising PCSs, restricting itself to issuing guidelines -- and revising them. By contrast, 90 per cent of India's 83,685 fuel retail network is state-controlled.

The Modi government will spend little on PCS -- it plans to install only 3,263-46,397 (in varying scenarios) public chargers in eight cities by 2030, R K Singh, minister for power and MNRE told Parliament this week -- compared to over Rs 30,000 crore in subsidising the EV vehicle ecosystem.

Also, there is no blueprint today on how do you go about putting up a PCS even though the government did away with the need for a licence earlier this year, says Abhijeet Sinha, director, Ease of Doing Business, who conducts EV trials on highways on ways to make PCSs viable.

He compares EV outlets to a petrol pump where after securing a licence one can be ready in 20 days on the strength of standardised physical platforms, support from oil marketing companies, and financing by banks on the basis of the licence and visibility of cash flows. None of the factors exist in the EV charging space, he said.

Two PCS prototypes with over 220 chargers between them are ready in Gurugram, with 72 per cent utilisation of chargers, Sinha said, compared to 2-3 per cent usage nationwide. But personal users are few.

He compares the ongoing PCS pilots on the Delhi-Jaipur highway to small air terminals.

Each outlet will have a mix of 20 slow-charging AC chargers to fast-charging DC units besides cargo hub, EV retail showrooms, restaurants and other services.

“A petrol pump reaches its break-even in 24-30 months (excluding land), Metro takes 8.5 years, no one knows about charging stations when they will break even,” Sinha added.

Some start-ups like Exponent Energy and Log9 Materials are trying to use technology to bridge the gap between profits and losses for PCS.

“It unlocks the ability to build a profitable charging network where we can sell energy to 40 vehicles per day at half the price compared to existing PCS that charge only two to three vehicles daily.”

The catch here is that superfast charging works only if both battery and the charger are Exponent-sourced.

Log9 is using newer battery materials and technology to get a leg-up on charging speed.

Irrespective of the charger, the lithium-ion-based Log9 battery, commercially available this year and using titanium, lasts 20 years, is much safer and charges much faster, founder Akshay Singhal said.

But the batteries cost more and have lower energy density or tend to be heavier compared to equivalent nickel-manganese-cobalt or lithium iron phosphate cells.

The company will start a cell manufacturing line by October, he added.

Joulepoint's Dodda expects the charger market to reach 20,000 units this fiscal, and balloon to 500,000 by 2030, with highways playing a key role. But for that to happen resident welfare associations -- spooked by recent EV fires -- slow moving utilities and public officials must come together. And the government must loosen its purse strings.