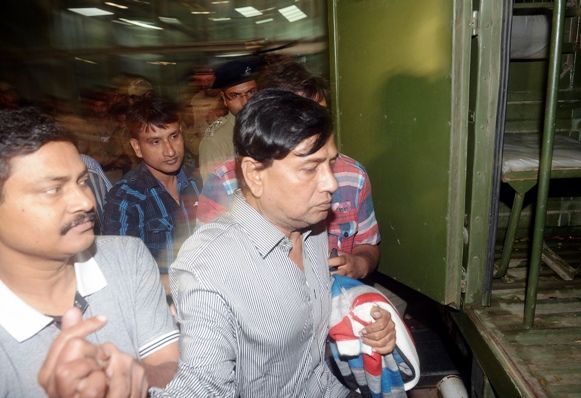 Markets regulator Sebi on Friday imposed a fine of Rs 2 crore on Saradha Realty, its chief Sudipta Sen and two directors, Hemanta Pradhan and Monoj Kumar Nagel,  for failing to comply with its earlier directions to wind up illicit money-pooling schemes and refund the investors.

The Securities and Exchange Board of India said these entities had failed to comply with the directions issued by it and carried on as an unregistered CIS.

According to the regulator, Saradha Realty is engaged in the fund mobilisation activity from public through investment contracts by floating CIS and it had launched such scheme without obtaining certificate from Sebi.

"I am of the view that upon such conclusion and upon being so directed to comply with directions as mentioned in aforesaid order, if the company/ its directors fail to wind up its existing CIS, fails to refund the money collected by it under the schemes with returns...and fails to submit a winding up repayment report to Sebi...within a period of three months from the date of order, then, it means, its status is still alive as unregistered CIS," Sebi General Manager and Adjudicating Officer Rachna Anand said in an order.

Also, the status of Saradha Realty is still shown as active on the MCA website. Therefore, continuing with such status without having registration certificate from Sebi is in contravention of Sebi Act and CIS regulation, she added.

In April 2013 Saradha Realty, as also its promoters and directors, were asked by Sebi through an order to wind up all existing collective investment schemes and to refund the money collected from investors, with returns, within three months.

Sebi’s order had followed a huge furore in Kolkata and other parts of West Bengal at that time about the massive funds collected by Saradha group through various schemes, including those relating to real estate and hospitality projects, and the subsequent alleged non-payment of returns to investors.

The matter had also escalated into a huge political controversy, resulting in a probe by various investigative and enforcement agencies including Sebi.

Source: PTI© Copyright 2021 PTI. All rights reserved. Republication or redistribution of PTI content, including by framing or similar means, is expressly prohibited without the prior written consent.
Related News: Saradha Realty, Sebi, CIS, Securities and Exchange Board of India, Sudipto Sen
Print this article