The Supreme Court asked the Centre and the RBI on Monday to place on record the K V Kamath committee recommendations on debt restructuring in view of Covid-19 related stress on various sectors as well as the notifications and circulars issued so far on loan moratorium. 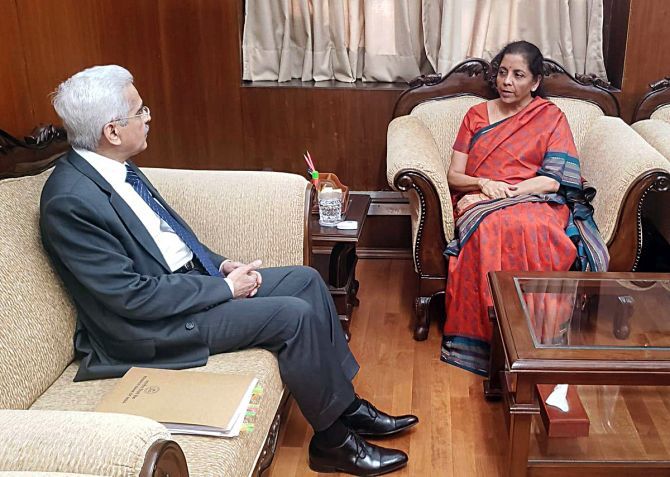 The apex court's direction came after the finance ministry’s decision to grant relief to individual borrowers as well as medium and small industries by agreeing to waive compound interest (interest on interest) charged on loans of up to Rs 2 crores for a six-month moratorium period announced due to the pandemic.

A bench comprising Justices Ashok Bhushan, R Subhash Reddy and M R Shah took up the pleas alleging that banks have decided to charge interest on the EMIs which have not been paid by borrowers from March 1 to August 31, taking benefit of the RBI's loan moratorium scheme.

In the hearing conducted via video conferencing, the top court took note of the grievances being faced by various sectors such as real estate stating that they have been left out under the Centre's new proposal.

The apex court has asked the Centre and the Reserve Bank of India to put before it within a week the recommendations and the decisions and other notifications on loan moratorium and also "consider the issues raised by the real estate associations and the power producers".

Meanwhile, Indian Banks Association (IBA), Confederation of Real Estate Developers Association (CREDAI) and other parties have been granted liberty by the bench to file their responses to the affidavit of the Centre.

Senior advocate C A Sundaram, appearing for the real estate sector, said it has been completely left out which should not have been done "in this kind of scenario” and the firms will have to pay interest on EMIs from September onwards.

Another senior lawyer, Kapil Sibal, said that he wanted to file a detailed affidavit to the Centre's reply as there are certain facts which need to be dealt with, and sought time.

During the brief hearing, the bench said it was considering everything as a “balance” has to be struck between the needs of the banks and the borrowers and sought IBA's response on the Centre's decision.

“Ok, we will grant time to file a reply to the affidavit. We are considering everything. A balance has to be struck. You also reply to the stand of the individual bank,” the bench said.

On being asked as to how and when the banks will implement the plan, senior advocate Harish Salve, appearing for IBA, said that once the RBI issues a circular on the issue, the banks will do the needful within 24 hours.

Senior lawyer V Giri, appearing for RBI, said the government has taken a decision at the “highest level to handhold small borrowers” and had held deliberations on aspects of reliefs to various sets of borrowers.

Solicitor General Tushar Mehta, appearing for the Centre, said that the government has taken a decision after taking a holistic view of the entire situation.

“I cannot object to the time being granted to the reply (to the other side) but as far as the fact that certain sectors are being left out, I can say that we had to take a holistic view of everything,” the law officer said.

He said the government will be placing the Kamath committee recommendations on record.

“You also place on record the other decisions taken by the government in this record,” the bench said.

The IBA said that due to an interim order of the top court staying the decision of banks to declare NPAs, the accounting exercise has frozen.

The counsel for RBI said that the Kamath committee was constituted by the central bank and it has considered various sectors including corporate loan restructuring.

“But this decision (waiver of interest in interest) was taken at the highest level by the government to handhold vulnerable small borrowers who have taken loans up to Rs 2 crore,” Giri, the counsel for RBI, said, adding that subsequently a circular will be issued.

One of the petitioners sought extension of loan moratorium scheme during the hearing.

The government had earlier said in its affidavit that it will seek due authorisation from Parliament for making appropriate grants and "the endeavour shall be over and above the support of Rs 3.7 lakh crore to MSMEs, Rs 70,000 crore for home loans etc. already extended through the Garib Kalyan and Aatma Nirbhar packages announced by government earlier."

It had said that the relief to all borrowers in respect of compounding of interest during the period of moratorium would be admissible to the categories specified irrespective of whether the borrowers had availed the moratorium or not.

Initially, the RBI on March 27 had issued the circular which allowed lending institutions to grant moratorium on payment of instalments of term loans falling between March 1, 2020 and May 31 this year due to the pandemic.