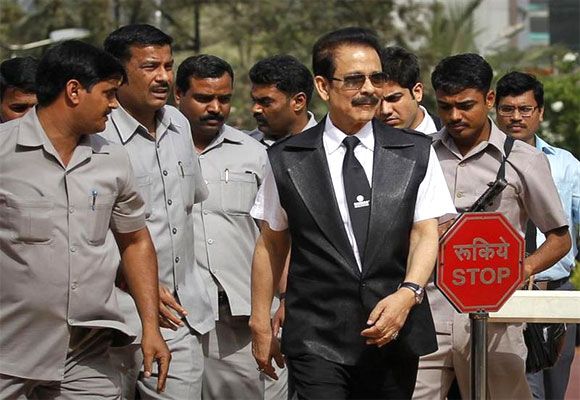 In a big blow to beleaguered businessman Subrata Roy, the Supreme Court on Monday directed attachment of Sahara Group's prime property worth Rs 39,000 crore at Aamby Valley in Pune for realisation of money to be paid to its investors.

The apex court also asked Sahara Group to provide it within two weeks the list of ‘unencumbered properties’ which can be put on public auction to realise the remaining over Rs 14,000 crore of the principal amount of around Rs 24,000 crore that has to be deposited in the Securities and Exchange Board of India-Sahara account for refunding money to the investors.

A bench headed by Justice Dipak Misra, which will hear the matter again on February 20, noted that out of the principal amount, the group has deposited around Rs 11,000 crore and it has to deposit over Rs 14,000 crore more.

The bench, also comprising Justices Ranjan Gogoi and A K Sikri, was told by SEBI counsel Pratap Venugopal that the interest on the principal amount till October 31, 2016 would lead to a liability of Rs 47,669 crore on the Sahara Group, which on Monday deposited over Rs 600 crore in accordance with the January 12 order by which extension of time beyond February 6 was refused.

The apex court had said failure to pay the said amount would lead Sahara Group Chief Subrata Roy going back to jail.

The top court was not in agreement with Sahara’s counsel senior advocate Kapil Sibal that the amount should be realised in accordance with the roadmap provided by the group, which suggested the deadline of July 2019 will be adhered to.

“No small token amounts,” the bench observed, adding that the balance amount of over Rs 14,000 crore can be realised by public auction of Sahara's unencumbered properties which are free from litigations, mortgage and any charge.

“The fundamental question is that the court (Supreme Court) found that the money collected by you from XYZ etc was in violation of the rule,” the bench observed while not accepting Sibal’s plea that he should be given at least a minimum of two hours to explain that the apex court judgment against Sahara was ‘ex facie erroneous’.

“It’s a question of a core verdict,” the bench said, while referring to the August 2012 judgement by which the Sahara Group was asked to make refund to the investors.

Sibal said the court should refrain from passing any order as the review petition against the August 2012 judgment was pending and he would demonstrate the ‘error on the face of the records’.

The bench, which was not impressed with his contentions, said, “You talk about the attachment of the property. We have no option. You give the list of unencumbered properties which are good enough to bring Rs 14,000 crore. Then we will let you (take back) the Aamby Valley (property) and we will hear you.”

The bench also said the question of consideration of the interest amount would be taken up after the principal amount has been realised.

When the Sahara Group pleaded that it should be given an opportunity to explain its case to satisfy the court that its orders were erroneous, the bench said, “There is no question of going back.”

Sibal submitted that there was a need for ‘breathing time’ for making the payment and contended that no bank or investor was claiming the money from Sahara Group.

The senior advocate also raised the issue of demonetisation and liquidity crunch in generating the money.

It was following this submission, that the bench asked him to make effort for public auction of the unencumbered properties and expressed its intention of seeking placing a list of properties which are free from litigation and mortgage.

While the bench was deliberating on the issue of the list of properties and wanted to know about the Aamby Valley, senior advocate Shekhar Naphade, who is assisting the court as amicus curiae, and SEBI counsel, said the hill resort was approximately worth Rs 39,000 crore.

The bench noted that the SEBI counsel and Naphade were of the view that the Aamby Valley property was substantial for realising the amount and they favoured its attachment as such a move would press Roy and other directors to endeavour for depositing the amount in the SEBI-Sahara account. This was opposed by Sibal.

However, the bench said, it was convinced that the property should be ordered to be attached.

During the hearing, Sibal said if the bench was dealing with the issue of Aamby Valley what was the need for seeking a list of properties.

When he raised the issue of demonetisation and sought more time to arrange the money, the bench said, “Either you speed up or we will go for your property.”

“We are talking about attachment when we have no option. So, give us the list of properties which are good enough to bring Rs 14,000 crore,” it said.

The bench had at the last hearing granted liberty to the Sahara Group chief to transfer 35 million pounds, equivalent to Rs 285 crore, deposited in a bank in London to SEBI-Sahara account as part of Rs 60-crore payment required to be made.

That order was complied with on Monday.

The apex court had on November 28 last year asked Roy to deposit Rs 600 crore more by February 6 in the SEBI-Sahara refund account to remain out of jail and warned that failure to do so would result in his return to prison.

The apex court had on May 6, 2016 granted a four-week parole to Roy to attend the funeral of his mother. His parole has been extended by the court ever since.

During the last hearing, the bench had scrutinised the repeated extension of Roy's parole and said too much indulgence had been shown to him by the court.

However, woman director Vandana Bhargava was not taken into custody.

Source: PTI© Copyright 2021 PTI. All rights reserved. Republication or redistribution of PTI content, including by framing or similar means, is expressly prohibited without the prior written consent.
Related News: Sahara, Securities and Exchange Board of India-Sahara, Aamby Valley, Subrata Roy, Kapil Sibal
SHARE THIS STORY
Print this article