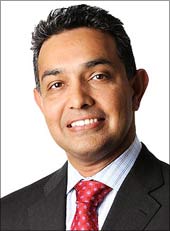 Another Indian on the list is PepsiCo's Indra Nooyi at the 36th slot with a pay package of $13.98 million.

With a total payout of over $104 million in 2008, Jha is the only CEO to get a compensation package exceeding $100 million, with Occidental's Ray Irani at a distant second with $49.9 million.

Irani is followed by Walt Disney's Robert Iger ($49.7 million) at the third slot.

In the overall ranking, compiled by the Wall Street Journal, Citigroup CEO Vikram Pandit comes at the fourth position with a payout of $38.2 million. Besides, Pandit is the highest paid CEO for bailed out banks in the US, a newspaper report said.

The WSJ CEO Compensation Study was conducted by management consulting firm Hay Group and based on an analysis of CEO pay of the first 200 US companies with fiscal year 2008 revenue of at least $5 billion that filed their proxy statements between October 2008 and March 2009. WSJ said the study would be updated as companies file new proxies.

Among the bailed out banks, Pandit is followed by JP Morgan Chase's James Dimon ($20.9 million) and Wells Fargo's John Stumpf ($8.8 million) at the second and third spots, respectively.

The survey showed that overall, the median chief executive salary and bonus paid last year by 200 big American companies declined 8.5 per cent to $2.24 million, as profits and stock prices were hit by recession.

"Including the awarded value of stock, stock options and other long-term incentives, total direct compensation for chiefs slipped 3.4 per cent to a median of $7.6 million," the Wall Street Journal said in an accompanying report.

In the wake of the financial meltdown, huge executive compensations at American companies had come in for severe criticism from different quarters.

The payouts for chief executives dropped sharply at banks and brokerages. 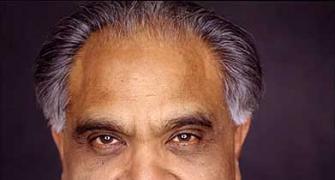 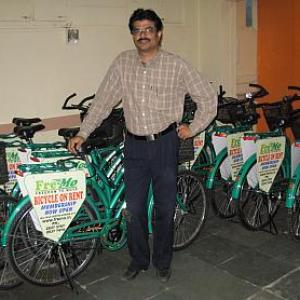 This CEO quit his job to become eco-entrepreneur