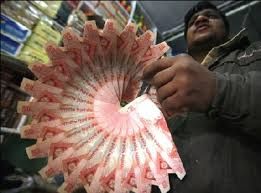 The rupee on Friday bounced back by 26 paise to end at 59.93 versus dollar as exporters and some banks sold the greenback, but steep losses in previous sessions forced the local currency to log its first weekly drop in three.

After ending at 59.72 last Friday, the rupee depreciated 21 paise this week which saw the Narendra Modi government present Railway budget and Union Budget.

The rupee on Friday resumed lower at 60.25 a dollar from previous close of 60.19 at the Interbank Foreign Exchange market.

It declined further to a low of 60.30 on early dollar demand from importers.

On Monday, the local unit had lost 29 paise.

Globally, the dollar index was quoting down by a mere 0.01 per cent against its major global rivals.

Pramit Brahmbhatt, Veracity Group CEO, said: "Rupee appreciated backed by dollar selling by corporates. Local equities closed down by almost one and half per cent, which capped the rupee's gain. The trading range for the spot rupee is expected to be within 59.50 to 60.50."

In the week ending June 27, the rupee had gained 10 paise.