Demand has also jumped from abroad, including the European Union and America. 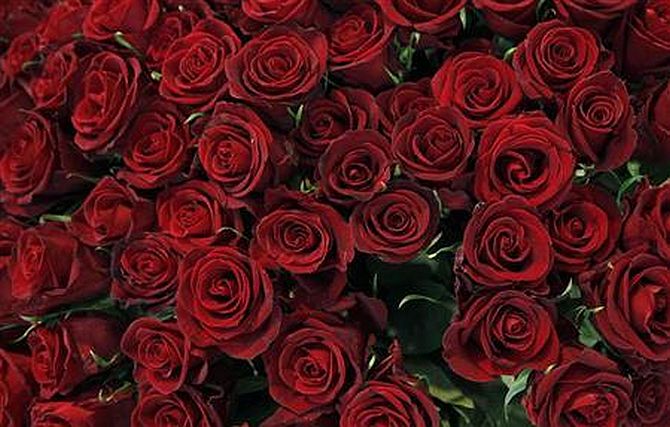 Offering roses is among the cheapest ways to ‘express love’ on Valentine’s Day. This time, however, doing so would mean paying 20-25 per cent more.

The reason given is sharp increase in demand on the occasion (it is this Friday) and reduced supply from major growing centres.

“There was huge damage of plants in last year’s flood across major growing regions, including Pune and Kolhapur in Maharashtra and Bengaluru in Karnataka.

"We are selling rose between Rs 12-15 a piece (per stem) ex-farm this year as compared to Rs 9-10 a piece around the same time last year,” said Idrees Saifee, director, Vibrant Fresh Farms, a Pune–based rose farmer, wholesaler and exporter.

Demand has also jumped from abroad, including the European Union and America.

While exporters completed their shipment deliveries well in time, they are unhappy at the inability to push business aggressively abroad.

"Even after promising higher wages, field workers are not adequately available.

"Therefore, we could not dispatch consignments as per requirement from overseas; we booked less orders this year,” said Bipul Jain, director of Fauna International, a Kolkata–based  exporter.

The central government also reduced the subsidy granted under the Merchandise Exports from India Scheme to five per cent, from seven per cent earlier.

“Unfortunately, the realisation from flowers has not increased significantly due to competition in overseas markets.

"Hence, the profitability of rose exporters has declined significantly this year, due to a sharp increase in cost of procurement and steady realisation.

"Rose export is not a good business as it used to be until a few years ago,” regretted Jain.

India’s rose export is estimated to have declined by 10-15 per cent this financial year for these reasons.