Banks are seeking an order that Mallya should appear in person before the court. 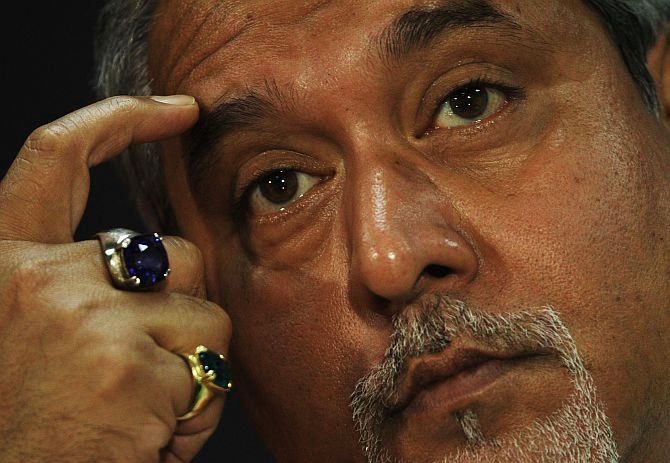 Image: A consortium of banks has moved the court seeking the freezing of Mallya’s passport. Photograph: Reuters

The Supreme Court on Wednesday asked Vijay Mallya to be present before it on March 30, with his passport, after learning that the beleaguered liquor baron had left the country.

Mallya, the chairman of the UB Group and a Rajya Sabha member, is facing legal proceedings for allegedly defaulting on loans of Rs 9,000 crore (Rs 90 billion).

A consortium of banks has moved the court seeking the freezing of his passport.

On Wednesday, Attorney General (AG) Mukul Rohatgi told the Bench of Justice Kurian Joseph and Justice R F Nariman that Mallya had left the country, possibly for the UK, on March 2 - the day the banks had appealed against him at the Debt Recovery Tribunal (DRT).

“I spoke to the CBI little while ago and it told me that on March 2 he (Mallya) left the country,” said Rohatgi.

The Bench then served a notice on Mallya, seeking his response within two weeks.

As Mallya has already left the country, the Bench allowed the plea of the AG that the notice can be served on Mallya through his official Rajya Sabha email, the Indian High Commission in London, and also through the counsel representing him before various high courts, the DRT and also through his company.

During the brief hearing, the AG also said more than Rs 9,000 crore was due to various banks and various proceedings were going on against Mallya at debt recovery tribunals in Bengaluru and Goa.

When the bench wanted to know what the petitioners sought, Rohatgi said the banks were seeking an order that Mallya should appear in person before the court and a direction for freezing his passport.

The AG said that Mallya has assets, both movable and immovable, abroad which are far excessive to the overdue loans.

The AG said the loans were granted keeping in mind that Kingfisher Airlines had a fleet of aircraft as well as brand value. The loans were given also on the basis of the logo and the aircraft were attached to the third party.

“Today I submit he (Mallya) should appear before you (the Supreme Court). We want disclosure. We want to recover the money, which is public money,” he added.

The consortium of banks, in their appeal, has appealed against the March 4 order of the Karnataka High Court refusing an “ex-parte ad interim” order - preventing the defendant from selling their assets - against Mallya, England-based Diageo Plc and the United Spirits Limited.

The banks said that the high court should have passed an interim order, securing their financial interests.

Prior to moving the high court, the banks had filed four pleas with the Debt Recovery Tribunal in Bengaluru, seeking the freezing of Mallya’s passport, issuance of an arrest warrant against him and a “garnishee order” Diageo Plc and United Spirits Limited from disbursing $75 million (about Rs 500 crore) to Mallya - as agreed upon in his exit settlement.

They had also sought a direction to Mallya that he should disclose his assets on oath.

The banks had moved the DRT after Mallya’s recent resignation from the chairmanship of United Spirits.

The banks have sought a direction to Mallya to “furnish suitable security for his appearance before the DRT” during the pendency of banks’ original applications for recovering debts.

The plea said the banks “individually” had advanced loans to Kingfisher Airlines Limited and by way of a Master Debts Recast Agreement (MDRA), executed on December 21, 2010, and related documents, the existing loans were restructured and was treated as a single facility.