With hotels and restaurants being barred from levying service charge, waiters, chefs and other workers are worried they will lose out on money and are planning to approach managements to seek a pay raise. 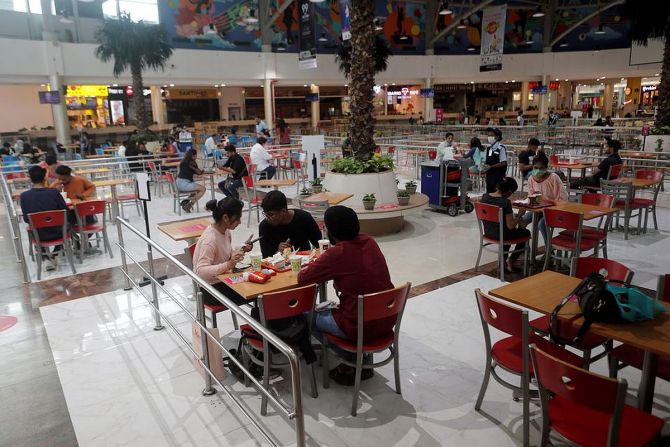 They are also apprehensive that tips given by customers out of goodwill will dwindle.

Uttarakhand-native Prakash Singh Koranga, 27, a chef who works at an outlet of popular franchise Moti Mahal Deluxe restaurant in south Delhi, said service charge which gets proportionally divided among the staff acts as an "extra income" and "incentive to give our best at the job".

"I have been in this industry for about five years now.

"As a chef, I will continue to cook the best meals I can for guests, but the decision has affected our morale, as now we would have to be content with our salary only.

"Is it possible to survive in this time of inflation with just a salary of Rs 14,000?

We will have to follow the new norms, so I will ask for a pay raise from my employer to compensate," he told PTI.

His colleagues in the kitchen and outlet manager Naveen Pandey, who has worked for 18 years for the famous chain, echoed his sentiments.

"I may even switch to another place (restaurant) with better prospect, if they don't hike my salary," said Pandey, a Delhi native.

Amid rising consumer complaints, the Central Consumer Protection Authority (CCPA) on Monday barred hotels and restaurants from levying service charge automatically or by default in food bills and allowed customers to file complaints in case of violation.

The decision has drawn mixed response from hoteliers, restaurant owners and associations, across India, some of whom said the move will "not impact" their businesses while others apprehended it may have a bearing on their revenues and may cause dissatisfaction among their staff, who were used to getting their share of service charge every month till now.

Chefs, waiters, kitchen staff constitute the backbone of a restaurant business with a few desk staff or a manager fronting the day-to-day operations.

Staffs of several big and small restaurants, cafes and hotels PTI spoke to from Delhi to Kolkata and Mumbai to Chennai said that they would have to accept the new norms willy-nilly, but many were categorical that they won't settle with their existing salary.

A waiter, employed at an Aminia outlet in the New Market area, on condition of anonymity, said, "I am getting Rs 1,000-1,500 on an average from customers every day (in tips).

"We never ask but there are many who place an extra Rs 50-100 note with the bill and gesture us not to give it back.

"Don't know if tipping will be prohibited in the name of scrapping service tax."

There is no service tax calculated during billing in Aminia. But can tipping by patrons be stopped? Will it be now termed illegal, he asked.

Suvendu Porel, a waiter at Peter Cat, also said many patrons personally give tips, satisfied with the service and food, and they do it as per their wish.

In central Delhi's Connaught Place, a number of big restaurants and posh cafes are located.

In south Delhi, a staffer at Green Sky Cafe which serves Korean cuisine with BTS boy band music in the background, said, "we don't charge service tax, so the decision won't impact us."

"I do the dishes. I have been working in this restaurant for the last 25 years.

"My salary is very little to feed a family of five in a city like Delhi.

"We used to get a little respite from the service charge.

"The money helped me to pay for small expenses like bus pass. This will hit our lives. What is our fault,” asked Rajesh (49), an employee at a restaurant in Connaught Place.

Many hoteliers, restaurant owners and associations, across India, also pointed at the terrible impact the COVID-19 pandemic has had on the hospitality and food sectors, and raised concerns over the impact that this move would have on the business.

In Mumbai, Maharaja Restaurant's director and senior vice president of Hotel and Restaurant Association of Western India (HRAWI) Pradeep Shetty said, "The restaurant industry was slowly recovering after the disruptions caused by the pandemic, during which many workers had left and were engaged in other jobs.

"It is very difficult to retain and to hire employees in this business and at a time when we were trying to get the people who had left the industry this decision on service charge has made it far less attractive for people to join back."

Covid had hit this industry "very badly" and this decision on service charge "will continue to make it difficult" going forward.

"Now as owners it has become very difficult for us and we have to work on it and see how we can compensate our workers," he added.

HRAWI president and Hotel Golden Swan's managing director Sherry Bhatia said nobody was forced to pay the service charge nor was any consumer turned back if they disagreed to pay it.

"The industry was expecting the enactment of a comprehensive law that would put curbs on levying charges over and above the cost of a product or service and which would be applicable across all industries," he added.

M Ravi, a senior member of Tamil Nadu Hotel Association, said hotels across Chennai and Tamil Nadu were not levying any service charge.

"Some hotels were charging it because if accidentally a cutlery gets damaged or broken while consuming food...that cost is recovered from this.

"Some amount also goes to the labour but it is shared across departments among the employees," he told PTI.

The Kerala Hotel and Restaurants Association (KHRA) said that service charge is not levied upon customers by its members.

"Moreover, it is a reward given by a customer if he or she is happy with the service or food quality, and therefore, it is customer's choice," KHRA state committee president G Jayapal said.

"As a result, the Central Consumer Protection Authority (CCPA) direction will not affect us," he added.