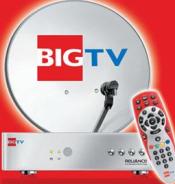 Reliance BIG TV, the DTH arm of Reliance Communications, is planning to introduce 60 more channels including its own entertainment channels in the next three months, a top company official said.

Presently, BIG TV broadcasts 236 channels. "We are planning to introduce two new transponders which will enable us to broadcast another 60 channels which include our own HD movie and entertainment channels in the next three months," Reliance Communications' chief executive officer (DTH and IPTV), Sanjay Behl, said.

He was speaking after announcing its new product of High Definition (HD) and Digital Video Recorder (DVR) service.

Besides, the company is also open to diluting up to 20 per cent stake of the company to a strategic partner.

"We are open to diluting our stake up to 20 per cent to a strategic partner. In that case there would be possibilities of Foreign Institutional Investors (FIIs) as well as other investors showing interest," Behl said.

"We are in talks with HD content providers like CBS, ESPN, FOX News, Discovery, HD to get HD programs including concerts, sports, movies and entertainment," he said. The company also plans to launch six new interactive services during this fiscal.

Commenting on its new product, Behl said Reliance BIG Tv is the only service provider to offer HD service with recording capability upward of 200 hours and a universal remote control in a single set-top box.

The company is rolling out its new product HD DVR set-top box across top 100 cities in India covering 6500 towns with a network reach of over 100,000 retail points spending over Rs 100 crore (Rs 1 billion) as part of its launch campaign.