As most readers know, I have been a staunch supporter of the RBI's modulated management of monetary policy over the last few years. (I was also an admirer of RBI's deft exchange rate management until it succumbed to misguided government pressure and allowed the infamous and sharp rupee appreciation of spring 2007. . . but that's another story, which I have told in previous columns).

In the past few months I find myself at odds with RBI's monetary policy. In a nutshell, I believe the RBI has fallen behind the curve in taking timely, anticipatory action to reduce policy interest rates. Specifically, the downswing in policy rates should have begun in October. Since that opportunity was ignored (as well as the one in January), the case for a sharper cut, in the order of 50-75 basis points in the repo rate, is now strong and should be acted on immediately. Let me elaborate.

The case for a swift and sizable reduction in the repo rate rests on several pillars. First, and most importantly, there is mounting evidence that the five-year old surge in India's economic growth, especially industrial growth, peaked a few months back. 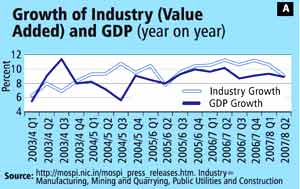 Figures A and B suggest that industrial growth may have peaked as far back as the final quarter of 2006-07, while GDP growth peaked in the following quarter.

In 2007-08 Q2 the annual rate of industrial value added growth dropped below 10 per cent for the first time in seven quarters. More disconcerting is the steeper decline in the 3-month moving average of growth in the industrial production, down to 8 per cent in October 2007 from the above-12 per cent heights it held for several months.

Add to this the policy-engineered slackening of bank credit growth to around 20 per cent from 30 per cent a year ago plus the deceleration of headline WPI inflation to below 4 per cent since August 2007 and we have a pretty convincing picture of a slowing industrial economy with low inflation.

Second, a key feature of monetary policy is that it has to be anticipatory, especially given the long and uncertain lags in its impact. Indeed, the recent success of the RBI's monetary policy in balancing exceptionally high economic growth with modest inflation owes a lot to timely and incremental ratcheting up of monetary measures over the past 3 years. 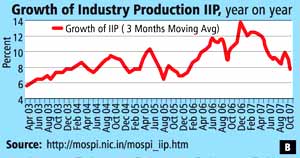 Looking ahead over the coming 12-18 months, it seems clear that global growth will slow significantly because of the subprime-led international credit crunch and high oil prices.

So, even though India's GDP growth in 2007/8 notched up a robust 8.7 per cent, the chances of encountering strong headwinds from the international economy are high, not to mention the toll extracted by an overly appreciated rupee. Added to the already apparent slowing of industrial expansion, it seems reasonable to anticipate slowing of GDP growth to below 8 per cent in 2008/9, especially if the current high policy interest rates are retained for a few more months.

Third, as Figure C shows, the retention of high policy rates in India, when the US Fed Funds rate has been cut aggressively in the past six months, has led to a sharp widening of interest rate differentials with respect to dollar instruments, thus increasing greatly the incentives for higher short-term foreign capital inflows into India and thereby aggravating the key macro policy problem of excess foreign capital surge. 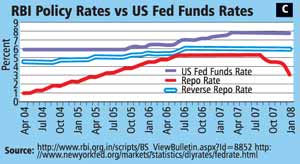 In his otherwise misguided piece last week (BS, February 6, 2008) Ajay Shah also emphasizes this valid point, though he fails to mention the central role of bad government policy (over the past three years) in undermining partial capital controls on external commercial borrowing and dodgy portfolio inflows.

It is this policy weakness which perhaps provoked an anguished plea from the RBI Governor in his monetary policy statement a fortnight back: ". . . it is critical for public policy to effectively, demonstrably and convincingly indicate the commitment to managing capital flows consistent with macro fundamentals through appropriate and decisive policy actions".

Fourth, India is perhaps unique in maintaining such a wide band of 175 basis points between the repo and reverse repo rates in the money market. The economic basis for this is dubious. For quite a long period, between April 2005 and September 2006 this band was a much more acceptable 100 basis points. A reduction of 50-75 basis points would help reduce the present unduly large gap.

Finally (and here my argument is more tentative), the recent, sharp correction and subsequent volatility in equity markets could take a disproportionate toll of "animal spirits" propelling real investment growth. A prompt reduction in policy rates (undertaken for the more traditional four reasons outlined above) could have a mitigating influence.

Let me now deal briefly with some arguments against a reduction in policy rates.

Counter: True. But investment slowdowns can be sudden and painful. In any case, given monetary policy lags, waiting for clearer signals of slackening investment could make the rate reductions tardy.

Counter: Yes, the inflationary potential of commodity shortages persists. But aggregate inflation is well within RBI's stated comfort zone. Moreover, such supply-side price pressures suggest less responsiveness to monetary measures. Put differently, the growth-inflation trade-off is steeper for inelastic-supply-driven price rises. I would maintain that the risks to growth are now higher than of inflation.

Argument 3: A rate cut now might reflate the bubbles in equity and real estate prices leading to more pain down the road.

Counter: Perhaps. But this risk is low. Most commentators believe that market participants have internalized the salutary lessons of recent turbulence.

Argument 4: There is plenty of liquidity still sloshing around. Look at the size of the "liquidity overhang". Any way, who is stopping the banks from reducing their deposit and lending rates?

Counter: First, the so-called "liquidity overhang" is more a measure of RBI's intervention to sterilize excess capital inflows. The correct solution to the problem is not to maintain high policy rates but for the government to respond effectively to RBI's plea for more effective capital account management. As for banks and other intermediaries autonomously reducing rates, surely the RBI should lead with policy rate signals. Have we forgotten the potency of central bank policy rate signals?

So, with apologies to Lewis Carroll, "The time has come," the Walrus said, "the time to cut the repo rate is now"!

The author is Honorary Professor at ICRIER and former Chief Economic Adviser to the Government of India. Views expressed are personal.