Heads of various public and private sector banks on Thursday sought to present a counter-narrative on RBI Governor Shaktikanta Das warning lenders about the perils of extreme risk aversion in the pandemic-stricken environment where credit demand is on the wane. 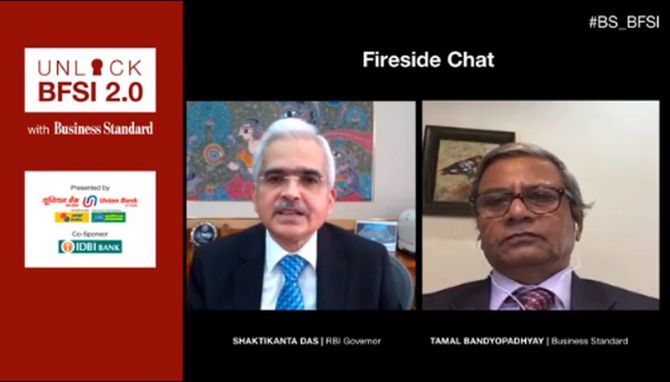 At a webinar on Thursday, bankers were of the view that the real problem was not risk aversion but lack of demand, which only the government can help revive.

Credit demand has been trending under-6 per cent for long now as against 15-16 per cent some years back.

Addressing the webinar organised by the financial daily Business Standard, Das asked banks to avoid extreme risk-aversion, as it is "self-defeating", and advised them to smell vulnerabilities in businesses early to avoid frauds, which have been growing lately.

The comments come on the back of steadily slowing credit offtake, leading many to wonder if banks have become too risk-averse because of their concerns over asset quality in a pandemic-stricken economy.

According to the RBI's annual report released earlier this week, frauds doubled to Rs 1.85 lakh crore in FY20.

Das warned banks that their extreme risk aversion will be self-defeating which will deprive them of their income. It will create a situation where banks will not be able to earn their bread, he said, adding that extreme risk-aversion was certainly not desirable.

Soon after the governor spoke, Aditya Puri, MD & CEO of the country's largest private sector lender HDFC Bank, said his bank has booked 20 per cent growth in core interest income in the June quarter, which proves the robust lending at his bank.

"There is no risk aversion but there is prudent banking. If we give money, we expect to get it back. If somebody gives loan now then someone can say later that it was imprudent lending." he said.

"We are definitely not risk averse. How can we be risk averse? You didn't see my topline growth of 20 per cent in Q1?," he quipped.

Addressing another session at the webinar, Punjab National Bank MD & CEO S S Mallikarjuna Rao said, "I can categorically say that there is no risk aversion at all. The real problem is lack of demand".

He noted that credit demand has been slowing ever since the RBI brought out stringent NPA norms in late 2016.

"And the IBC (Insolvency and Bankruptcy Code) only added to this. Through IBC alone, Rs 4 lakh crore of loans have been settled. While since late 2016, credit delivery has been on the wane, the pandemic has killed even what was remaining," he said.

Union Bank MD & CEO Rajkiran Rai said, "I don't know why we are accused of being risk averse when we are funding good projects. You can't blame us for poor credit demand when overall ecosystem is missing".

SBI chairman Rajnish Kumar, who shared the session with Puri, was more nuanced in his view, saying credit growth is a function of demand.

"The governor is echoing the general sentiment that the banking system is not lending as they were doing in the past. But overall demand for credit is not very high," he said, and blamed the current credit situation on poor investments and the overall shape of the economy.

"We are lending up to certain limits and till March, we had good demand. But since the lockdown there is no demand from retail. All I can say is that we are lending at appropriate levels and managing our risks well," he noted.

Axis Bank MD & CEO Amitabh Chaudhry said he was comfortable in lending at a steady pace which was visible in its Q1 numbers when the loan book grew 16 per cent. But he also cautioned that the same level will taper off soon.

"What we are doing is trying to get business from right customers while ensuring that we aren't throwing good money after the bad money at a time when the economy is down is in bad shape. We are also answerable to our shareholders and also to the RBI and so we are doing caliberated lending," he said.

According to Citi India CEO Ashu Khullar, caution is in the air for all the lenders but Citi is supporting their clients apart from doing a lot of co-lending with international agencies now.

"The issue is not risk aversion but lack of demand. Capex is missing from the economy completely," he said.