These start-ups include high-growth companies such as Ola, Paytm, Lenskart, UrbanClap and Urban Ladder.
Nearly half of these have gone on to raise follow-on funding, a key measure of success for start-ups.
A few have become unicorns, the term for start-ups valued at $1 billion or more.
Ranju Sarkar reports. 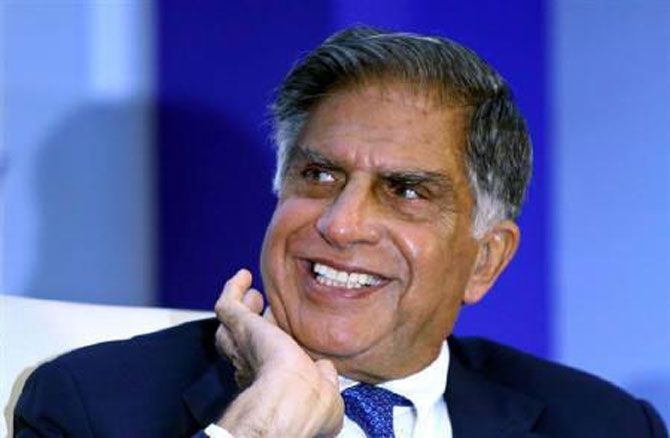 Earlier this month, when Ratan Naval Tata (RNT) invested an undisclosed sum in Ola Electric, this was the second time he was backing the fledging electric vehicle (EV) business.

He had first invested in Mission: Electric as the experimental programme by Ola was then termed, for deploying EVs and infrastructure, in 2017.

Till date, Tata, also chairman-emeritus at Tata Sons) has invested in 43 start-ups.

These include high-growth companies such as Ola, Paytm, Lenskart, UrbanClap and Urban Ladder.

Nearly half of these have gone on to raise follow-on funding, a key measure of success for start-ups.

A few have become unicorns, the term for start-ups valued at $ 1 billion or more.

Of his investment in 43 start-ups, only two are now ‘dead-pooled companies' or start-ups that have shut shop or failed, according to data compiled by Tracxn.

This shows a high success rate or more hits than misses, says a top executive at the Small Industries Development Bank of India.

Second, many of his investments have come at Series-B and above, showing a willingness to invest at higher valuations if the business models were proven.

For instance, Tata came in at Series-C stage in Zivame and Lenskart, and at Series-B in Car Dekho, Axio, Bluestone, Goqii and Urban Clap.

While the exact amounts are not available, Tata has invested only small amounts into most of the companies, going by the size of each investment round.

‘‘The stra­t­e­gy seemingly was more for RNT to allocate some part of his personal capital into co­m­­panies that were part of select funds where he was an advisor with those funds,’’ says the chief financial offic­er with an early-stage venture capital firm.

First Cry and Lenskart, for instance, raised two-third of their funding after Tata invested in them.

Tata’s coming on board helped these companies raise their profile and funds.

‘‘When someone like a RNT comes in as an investor, it definitely acts as a positive signal and gives a sense of validation to the outside market,’’ says Ashish Fafadia, partner, Blume Ventures.

Tata holds a token stake of less than 0.1 per cent in several companies such as Ola, Snapdeal, PayTm Mall, Lenskart, Urban Ladder, and Nest Away.

Investors see a few other takeaways from Tata’s investments.

He has taken a keen interest in medical research and health care services which is reflected in his investments in MUrgency, Swaasth and Lybrate, while Axio and Invictus focus on increasing the reach and penetration of wound (first-aid) and cancer treatment.

GOQii and Curefit are not directly in the health care space but are focused on fitness and preventive care.

‘‘While all the investments are in his personal capacity, he seems to have drawn inspiration/know-how of the industries/sectors from the Tata Group companies,’’ says Chiranjeev Anand of Lead Angels.

"Automobiles are close to his heart and he feels EVs could be the future (Ola Electric, Ampere Vehicles and Ola). Similarly, Lenskart (Titan eyewear), Bluestone (Caratlane was bought by Tanishq), and Teabox (Tata Tea).

He has also made some interesting early-stage bets on companies such as BoHeCo, Dogspot and Bollant which are a bit offbeat as compared to his typical investments but the categories are likely to grow fast, says Anand.

His investment strategy for growth and later-stage companies seems to have been guided by identifying ‘disruptive’ markets and leaders in these.

His investments into Ola, PayTm, FirstCry, and CarDekho came in at rich valuations, which shows a shift in mindset.

But, this seems to have paid off, with all the companies having gone on to raise bigger rounds from other investors.