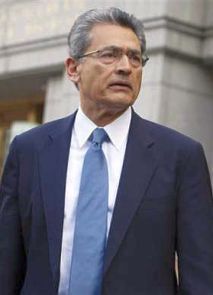 US District Judge Jed Rakoff in Manhattan directed Gupta to surrender by 2:00 p.m. EDT (1800 GMT) on that date to start serving his sentence, according to an order issued on Thursday.

Gupta, 65, was convicted in June 2012 on securities fraud and conspiracy charges for having fed tips, from Goldman board meetings in the second half of 2008, to longtime friend Raj Rajaratnam, founder of the Galleon Group hedge fund firm.

A three-judge panel of the 2nd US Circuit Court of Appeals upheld the conviction on March 25, rejecting Gupta's claim that Rakoff improperly admitted wiretap evidence at trial.

Two weeks later, on April 8, Gupta asked the panel to reconsider, or for the entire 2nd Circuit to review the case.

Gary Naftalis, a lawyer for Gupta, did not immediately respond to a request for comment.

Gupta is also a former global managing director of the consulting firm McKinsey & Co. He is the top corporate official convicted in a broad federal insider trading probe unveiled in October 2009, when charges against Rajaratnam were announced.

It is unclear where Gupta will serve his sentence. Rakoff agreed to recommend that he be assigned to a medium security prison in Otisville, New York, about 70 miles (113 km) northwest of New York City. The Federal Bureau of Prisons will make the decision. That agency did not return a call seeking comment.Rajaratnam is appealing his own conviction to the U.S. Supreme Court. He is serving an 11-year prison term.

The government has won about 80 convictions and guilty pleas in the insider trading probe.