The agency on Monday questioned three general managers of the Punjab National Bank who have handled the -International Banking Division and Treasury department of the bank, officials said without revealing their identity. 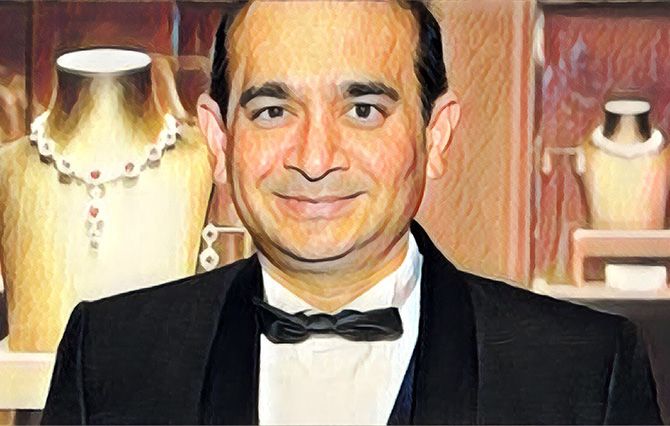 The Central Bureau of Investigation has sought from the Chief Vigilance Officers of five banks the details of financial transactions in the nostro accounts of Punjab National Bank on the basis of 293 fraudulent Letters of Undertaking (LoUs) issued by it to jewellers Nirav Modi and Mehul Choksi, officials said on Monday.

The agency has also collected documents related to Nirav Modi from Cyril Amarchand Mangaldas, a leading law firm, at the start of the investigation, they said.

During the course of the searches after registering the FIR against Nirav Modi, the CBI felt that some files could be with the law firm, officials said, adding a team went to the office of the firm early this month and collected those documents.

The agency on Monday questioned three general managers of the Punjab National Bank (PNB) who have handled the -International Banking Division and Treasury department of the bank, officials said without revealing their identity.

The general managers handling these departments get daily reports of the transactions taking place in the nostro accounts of the bank, they said.

The CBI has written to Canara Bank, Bank of India, State Bank of India, Allahabad Bank and Axis Bank seeking financial transactions into the nostro accounts of the Punjab National Bank on the basis of the LoUs, they said.

The overseas branches of these banks in Antwerp, Frankfurt, Mauritius, Hong Kong and Bahrain had credited over Rs 11,400 crore into the nostro account of Punjab National Bank on the basis of the guarantees (LoUs) given by to Modi and Choksi, they said.

The agency has now written to the vigilance officers seeking details of these transactions to unearth the money trail of Rs 11,400 crore.

A nostro account refers to an account that a bank holds in a foreign currency in another bank overseas to enable foreign trade by its clients.

The agency is trying to figure out the circumstances in which transactions to the tune of Rs 11,400 crore, almost nine times the profit of the PNB reported in 2016-17, went unnoticed by the chain of officials in the public sector bank, they said.

The CBI also continued questioning K V Brahmaji Rao, executive director of the bank, for the third day on Monday.

Rao, who started his career in banking 35 years ago as a probationary officer in Vijaya Bank, handled among other assignments the Mumbai zone of the bank where the crime was allegedly detected, they said.

Meanwhile, the agency has so far issued over 10 Look Out Circulars against senior executives of the companies of Nirav Modi and Mehul Choksi to restrict their movement, they said.

The circular alerts all ports of entry to restrict the movement of the person against whom the notice has been issued and report any such attempt to the issuing agency.

The circular may seek detention of the accused at the port of entry too.

The top brass of the agency has now issued clear instructions to the investigation teams to complete the probe in the cases of bank fraud in timely manner.

The instructions have been issued after reports that in some cases the agency waited too long before filing the FIRs.

"CBI director Alok Kumar Verma has directed the officers in-charge of these investigations to take all necessary steps to ensure that the bank fraud cases are concluded with a given time frame.

“He asked the officers not to spare anyone found involved in these scams," CBI Spokesperson Abhishek Dayal said.

One of the biggest financial scams of the country surfaced when company officials of billionaire jewellers Nirav Modi and Mehul Choksi approached the PNB’s Brady House branch, Mumbai, in January this year seeking LoUs in favour of their companies for payments to their suppliers.

The official handling the case sought 100 per cent cash guarantee before it could be issued to which the company officials said no such guarantee was sought in the past.

The official checked the records which did not show past LoUs to their companies which led to suspicion.

It is alleged that an official of the bank Gokulnath Shetty (now retired), for the last seven years, was bypassing core banking system of the bank and issuing LoUs fraudulently.

The LoU is a guarantee which is given by an issuing bank to Indian banks having branches abroad to grant a short-term credit to the applicant.

In case of default, the bank issuing the LoU has to pay the liability to credit giving bank along with accruing interest.

Shetty and another bank employee Manoj Kharat allegedly sent messages of these LoUs using an international messaging system for banking systems called SWIFT (Society for Worldwide Interbank Financial Telecommunication) which is used to pass instructions among banks globally to transfer funds but the messages were not updated in bank's internal software thus evading scrutiny, CBI has alleged.

Six officials of the bank including Shetty (now retired) and Kharat and a GM-ranked officer are in CBI custody for allowing fraudulent issuance of the LoUs to the companies of Modi and Choksi, they said.