Modi said the push towards a gas-based economy where the share of environment-friendly fuel in the energy basket will be increased from 6.2 per cent to 15 per cent by 2030, will create lakhs of jobs and help meet India's COP-21 commitment of cutting emission intensity by 33-35 per cent. 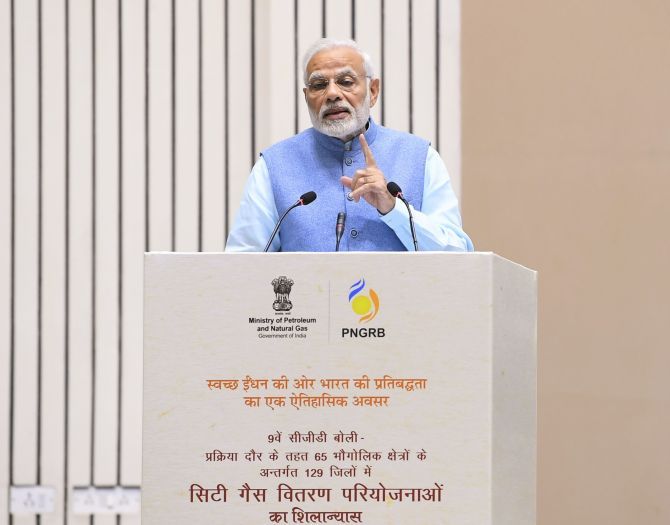 Speaking at first of its kind foundation laying ceremony, marking simultaneous beginning of city gas work in 129 districts of 18 states that were awarded in the recently concluded bid round, Modi said the push towards a gas-based economy where the share of environment-friendly fuel in the energy basket will be increased from 6.2 per cent to 15 per cent by 2030, will create lakhs of jobs and help meet India's COP-21 (Climate Change Conference) commitment of cutting emission intensity by 33-35 per cent.

While pricing and marketing freedom is protecting investments made in the new age natural gas sector, an independent transport operator and a trading exchange are being developed to provide transparency in operations of pipelines and price discovery, he said.

Besides, laying foundation stones through video conferencing at 65 Geographical Areas, made up of 129 districts of 18 states, to mark the beginning of work for CNG supply to automobiles and piped cooking gas to kitchens, Modi also launched the 10th round of bidding for award of city gas licenses in 124 new districts, which have been clubbed into 50 GAs.

"This is an important step in developing infrastructure," he said, adding once 10th round is completed, natural gas as fuel will cover 400 districts and 70 per cent population.

When the Bharatiya Janata Party-led National Democratic Alliance government came to power in 2014, only 66 districts were covered by city gas distribution (CGD) networks.

"Today when I am speaking to you, city gas project work is on in 174 districts. In 2-3 years, more than 400 districts will be in its ambit."

In four years, the number of piped natural gas connections to household kitchens has nearly doubled to little less than 50 lakh and this would rise to more than 2 crore by the time CGD work in cities added today is completed, he said.

Stations to dispense CNG, which is being pushed as a cheaper alternative to polluting petrol and diesel as auto fuel, has increased to 1,470 in four years from 947 that was set in the previous 25 years, he said, adding this number would cross 10,000 in 10 years.

Over Rs 22,000 crore is being spent on laying new pipelines that will transport natural gas to unconnected eastern states of Bihar, Odisha and West Bengal and further to north-eastern states, making available environment friendly fuel for industry and domestic use, he said, adding natural gas consumption is slated to rise 2.5 times in next decade.

The prime minister said the gas sector is an excellent example of his governance moto of reform, perform, transform.

"Reforms taken by the government in last four years has improved the performance of the sector and is now entering the transformational phase," he said.

"The interests of those investing in this sector are being protected. Domestic gas prices have been linked to global gas market and to increase domestic production, marketing and pricing freedom has been given," he said, adding the development of gas ecosystem provides immense possibilities for gas-based industry and creates lakhs of jobs.

"At least 300,000 youth will get employment in the (recently concluded) 9th round of bidding (for city gas licenses)," he said.

Also, gas based-economy will have a positive impact on the environment when automobiles will be run on CNG and industries get uninterrupted gas supplies, he said.

Modi said to promote clean energy, 5,000 compressed bio-gas plants will be set up in five years to convert agri-waste into bio-CNG.

This would not only address the problem of agri-residue but also increase farmer income.

Besides, 12 modern bio-refineries to convert biomass into fuel are being set up at an investment of Rs 10,000 crore, he said, adding blending of sugarcane-extracted ethanol in petrol has jumped four times since 2014 and the target is to take the doping to around 10 per cent level from current 3-4 per cent.

The government is also targeting generation of 175 GW of electricity from renewable sources by 2022.

Of this 100 GW would be solar energy, he said, adding more than 28 lakh solar pumps will be distributed to farmers in the next four years.

"All these efforts will help fulfill India's global commitment of reducing emission intensity by 33-35 per cent and producing minimum 40 per cent electricity from non-conventional sources by 2030," he said.

Downstream regulator Petroleum and Natural Gas Regulatory Board (PNGRB) had just a few weeks back awarded licenses for 78 out of the 86 GAs put on offer in the 9th round of bidding.

Of the GAs awarded in the 9th round, Modi laid foundation stones for work in 65 GAs, made up of 129 districts, while leaving out the ones in election-bound states like Rajasthan, Madhya Pradesh and Telangana due to the model code of conduct. 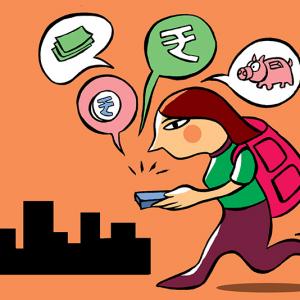