How good is the new compact UV from Datsun? Rachit Hirani from MotorOctane takes it for a camping trip to Rishikesh. 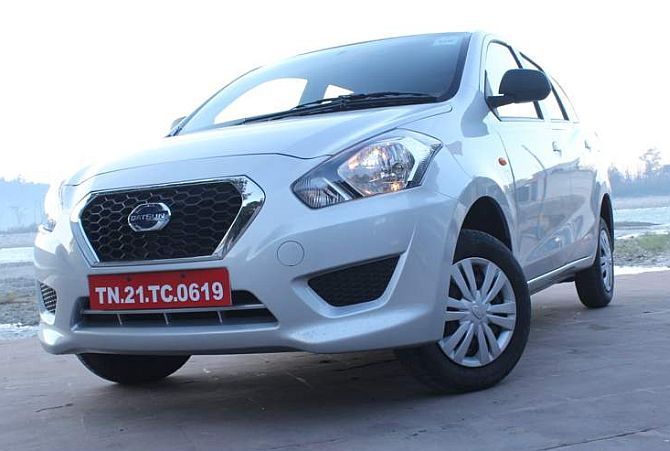 The sub 4-metre and the small size engine duty have made the business a bit too complicated for Indian car market.

Compact-size sedans and even SUVs are making their way, with some compromise.

However, Datsun has introduced a larger hatch called as the GO+. 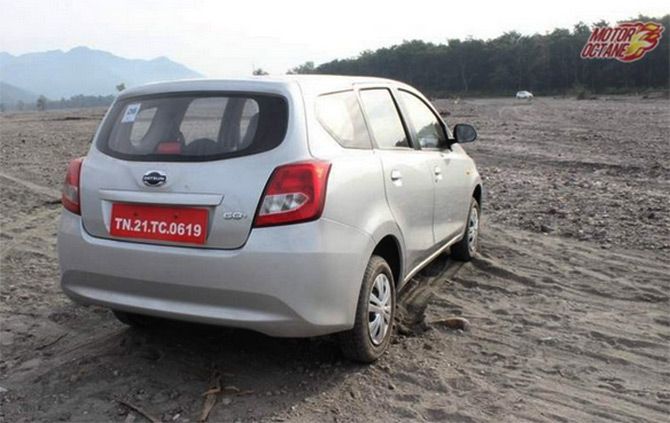 It is being marketed as a compact utility vehicle and does it do that?

We take it for a weekend camping trip and find out how much of the addition exists.

The PLUS stands for the larger boot and additional third row of seating.

The GO+ is based on the GO, and it shows the striking resemblance. The fascia’s of both are the same and the body design is the same till the rear door.

After which the belt line rises as you move towards the rear and even the wheel haunches are protuberant.

The blacked-out door pillar after the rear door (C-pillar) has a lesser glass area and this makes it very prominent.

The roof also gently slopes downwards towards the rear.

The boot lid of the GO+ is a new body part and the tail lamps are the same as the GO.

The rear bumper looks stylish and does look muscular. 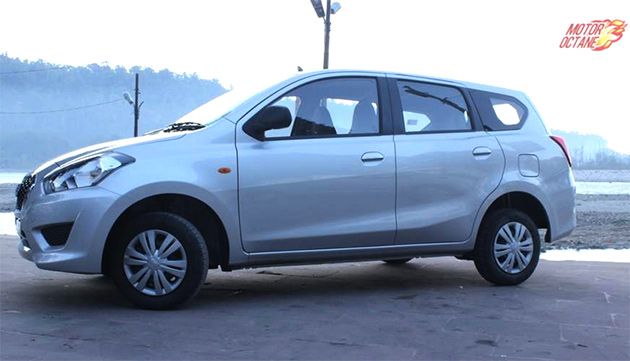 The length of the GO+ is under 4 metres, so it is as long as the Honda Amaze and Maruti Suzuki Swift DZire.

However, what this offers is extra flexibility with another row of seating or a humongous boot, when compared to the compact sedans and SUVs.

As the ground clearance is the same, it drives like any other compact car and is easy to manoeuvre through tight city lanes with a turning radius of 4.6 metres.

Get inside the GO+ and the first two rows are exactly the same as the GO. The fit and finish is good and plastic quality is decent. 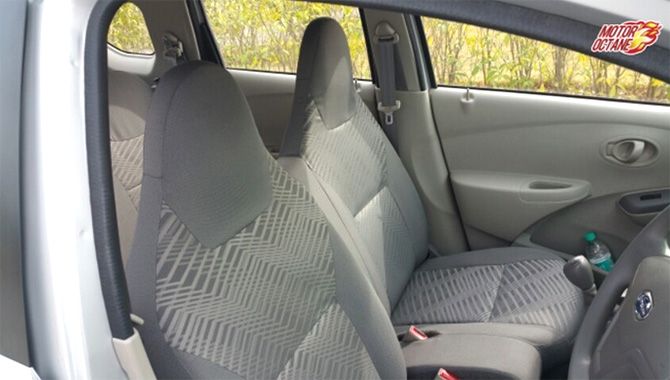 If your smartphone is larger than 5.2-inches then the docking station cannot hold it. All the three rows have fixed headrest.

In terms of features it misses out on basic things like rear wiper and maybe even rear defogger for improved rear visibility in monsoon and winters.

The A variant doesn’t get the mobile docking station, or power windows or the electric power steering also.

The first row is spacious and it has a bench-like seat, for storage of excess luggage next to the driver and the co-driver. 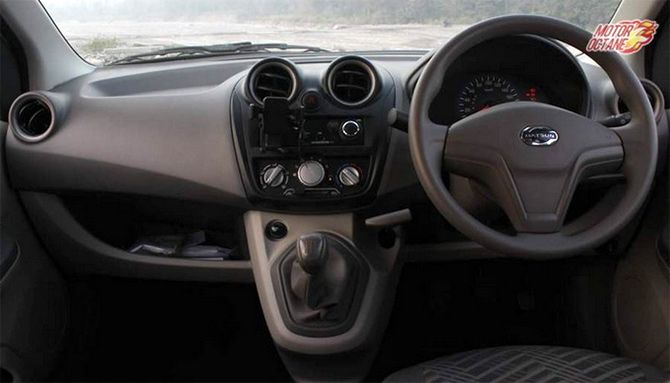 Some believe that three people can sit in the front row, but that isn’t the case, as the gear lever will make seating uncomfortable.

The second row has generous headroom, but knee room is just fine for tall people.

The thigh support too could have been better, but this is one of the best in its segment.

The third row is strictly for kids, and even Datsun calls this as a 5+2.

There is barely any head room, knee room or should room for adults.

With the third row raised, the boot size is a mere 48 litres and when the seats are flipped the space is 347 litres.

One can even flip the second row of seats and further increase the loading space.

With the third row of seats folded our entire tenting luggage fitted with ease.

The engine on the GO+ is the same 1.2-litre petrol engine that produces 67bhp of power and 104Nm of peak torque.

The power ratings are the same as the GO, but as the weight has been increased by 38kgs, the engine tuning has been changed for better drivability.

Lesser insulation makes the engine a tad noisy, but for this price you can’t get anything better. 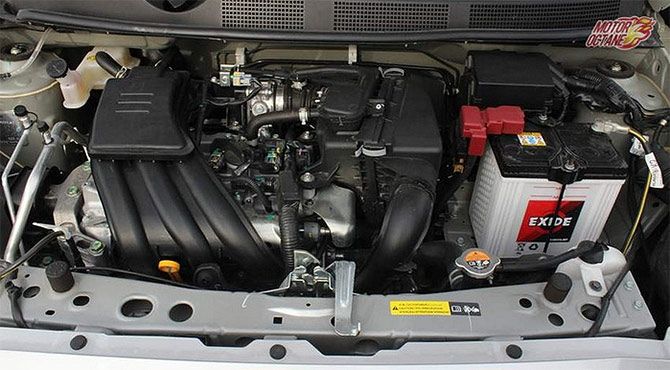 The power produced by the engine is sufficient for city or even highway driving and the GO+ has the biggest size engine of the lot.

This means there is more torque to pull easily in the city, with one of the best acceleration in this segment. There is a lot of vibration at idling.

The five-speed box manual transmission is mounted on the centre console and this makes it easy to shift, as the positioning is very convenient.

The GO+ runs a fuel efficiency of about 14-16km/l in the mix of city and highway driving.

As the GO+ has a longer body with the same wheelbase, the suspension has been stiffened to avoid it from bottoming out.

We drove it on very bumpy roads and places with no tarmac, still there was no effect and the underbelly didn’t scrap even once. 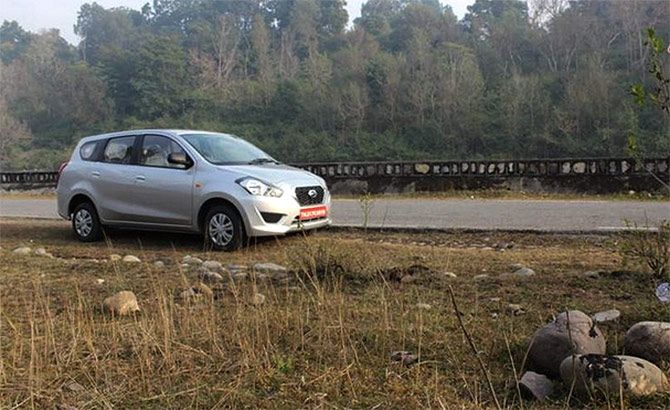 The ride is good and you do not feel uncomfortable even on bad roads. The handling is good for its size and it doesn’t feel scary.

The steering wheel is light and even the brakes bite well.

I shall be honest that the GO+ performed much well than what I had anticipated. It is certainly a good vehicle to pick up if you need flexibility of space and do not want to spend excess money on a larger MUV.

I started using a phablet a week ago and I’m not just used to it, in fact I don’t want to get back to a smaller phone as it has a better battery life.

Those who need a large boot or 5+2 seating, the Datsun GO+ will be the most affordable, and with a length under 4 metres, it is compact too.

The difference here is that the pricing is still affordable, as the GO+’s pricing will commence somewhere close to Rs 4.5 lakhs (ex-showroom, Delhi). The T variant is the best value for money.