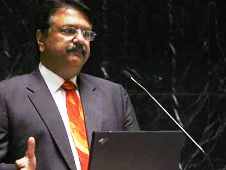 Billionaire Ajay Piramal is set to reap another windfall through a Mumbai property deal.

According to sources, Piramal has plans to sell part of Gulita, his sea-facing property in Worli, Mumbai, for Rs 450-500 crore (Rs 4.5-5 billion).

Piramal has started initial discussions with a few high net-worth individuals to sell part of the property.

He has plans to keep a fourth of the property with him, while he will split the remaining portion into three units and sell it off through multiple deals, said people in the know.

His initial plan was to reconstruct it into a luxury residential complex for his own purposes.

Piramal is looking at a rate of around Rs 150 crore (Rs 1.5 billion) for each unit and the total value would be Rs 450 -500 crore for three units together, sources said.

A Piramal Group spokesperson said: "We do not want to comment on market speculation."

When he bought Gulita, Piramal had outbid two finalists -- Anil Ambani and Gautam Adani -- who were believed to have quoted between Rs 350 crore (Rs 3.5 billion) and Rs 400 crore (Rs 4 billion).

According to investment banking sources, one of the persons who has shown interest was Ajay Mittal, chairman of logistics firm Arshiya International.

When contacted, Mittal  denied this information.

According to media reports, Mittal was interested in buying the South Mumbai-based Morena House, owned by steel tycoon Sajjan Jindal.

Morena House is a one-storey

The cash-rich Piramal Group has been active in the Mumbai realty space in the last couple of years.

In 2010, the group had sold its domestic pharma business for Rs 17,000 crore (Rs 170 billion) to the US-based Abbott Ltd at a valuation of over nine times its sales.

The ultimate buyer of residences on such land finds it difficult to attach an exact premium value to such developments as there is a large scarcity value in-built in owning a house in these locations.

Further, if the developer is able to service and brand the development appropriately, it is possible to extract a huge upside, especially if the seller has holding capacity. Residential values of up to Rs 100,000 a sq ft are in the realm of possibility."

In one of the costliest residential property deals in India, Jindal had concluded the purchase of Maheshwari Mansions, a sea-facing three-storey bungalow at Napean Sea Road in south Mumbai, by paying around Rs 500 crore in August this year.