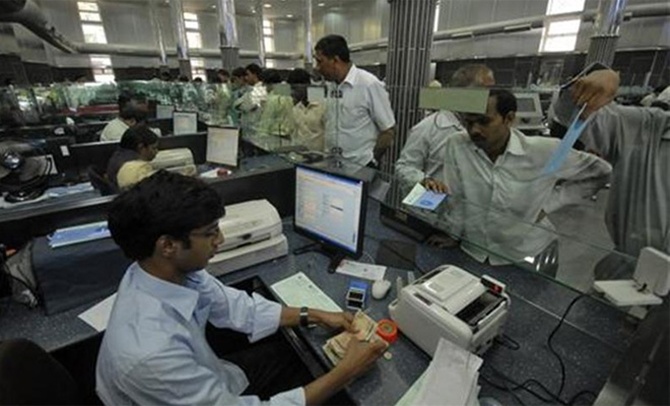 Deposits up to Rs 100,000 are insured. Read on for ways to raise this cover

Bank fixed deposits are among the safest of savings instruments.

The principal and interest are guaranteed and depositors know exactly how much return they can expect at maturity. But, what if the bank goes bankrupt?

Or it merged with another bank? What happens to your deposits in that case?

The latest Financial Stability Report of the Reserve Bank of India raises concerns about the soundness of public sector banks due to their high level of non-performing assets.

The level of stressed assets was highest for PSBs at 13.5 per cent of total advances as of this March, while the net NPA ratio increased from 3.1 per cent to 3.1 per cent, it added.

Given this, is there a need for those with deposits in PSBs to worry?

Since the government is the majority shareholder here, chances of bankruptcy are slim. If it fails on all financial parameters, it could get merged with a stronger bank, in which case there might be no real reason to worry.

If you have bank deposits up to Rs 100,000, your money is protected by the Deposit Insurance and Credit Guarantee Corporation.

It insures all deposits.

According to the FSR, as on March 31, the number of fully protected accounts was 1,345 million.

This constitutes 92.3 per cent of the total number of accounts, 1,456 million.

The international benchmark is 80 per cent.

Amount-wise, insured deposits at Rs 26 lakh crore (Rs 26 trillion) as at end-March constituted 30.8 per cent of assessable deposits at Rs 84.75 crore (Rs 847.5 million), against the international benchmark of 20 to 30 per cent, the report said.

Some PSBs face severe stress and the main reasons  are the high NPAs and the slow growth of last year, says Vibha Batra, senior vice-president at ratings agency ICRA.

“Some banks might not be able to grow and, ultimately, you need to grow to get out of the stress.

"That is why capital infusion for PSBs is critical. But on the reported capital adequacy, banks might not require merger, as yet,” she says.

Merger among PSBs can also be contentious because of the strong bank unions.

It is a possibility in case the government feels the need to bail out weak banks.

“The last forced merger was when Global Trust Bank merged with Oriental Bank of Commerce.

"The government has been stressing that merger among PSBs should be voluntary and not forced.

Deposits up to Rs 100,000 per depositor, across one bank, are insured under the DICGC scheme.

All banks pay premium to DICGC for this insurance.

There have been several cases of co-operative banks going bust. In such cases, deposits up to Rs 100,000 are protected.

So, if you have deposits with co-operative banks, restrict the amount to Rs 100,000 per bank, so that even if there is a problem with the lender, your money will be protected, says V N Kulkarni, of Abhay, a Bank of India-promoted debt counselling centre.

All deposits held in your single name, in one bank, will together be covered up to Rs 100,000.

Multiple joint accounts of the same persons in the same bank, but with different names as first applicant, will be also be covered separately up to Rs 100,000.

So, a joint account with A as first applicant and B as second applicant will be covered up to Rs 100,000.

Another joint account with B as first applicant and A as second will also be covered up to Rs 100,000, even if both are in the same bank.

If you have a loan from one bank and it gets merged with another, the new loan will depend on the agreement between the two banks.

It is unlikely that rates will change suddenly.

For instance, if your original bank’s loan book is smaller compared to the bank that takes it over, it is possible that the bank will offer you the lower loan rate.

Otherwise, it is possible that the bank might ask you to continue with your original contracted loan rate, says Kulkarni.

To check if your bank is financially healthy or not, customers must check some parameters.

These include the ratio of net non-performing assets, restructured accounts and provision allocated for bad assets.

“Customers of small co-operative banks must particularly keep track of these parameters on a regular basis.

"If you feel your bank is in trouble, keep only the minimum balance in your account. In the case of PSBs, since the government is the majority stakeholder, there is no real need to worry,” says Kulkarni.

The International Association of Deposit Insurers was formed in May 2002.

The aim is to enhance the effectiveness of deposit insurance systems, by promoting guidance and international cooperation. IADI currently represents 79 deposit insurers from 76 jurisdictions.

It is a non-profit body, constituted under Swiss law and domiciled at the Bank for International Settlements in Basel.

India's DICGC is a member of IADI.