The combined pay for India Inc’s top management was up 30 per cent in FY16, growing at the fastest pace in nine years 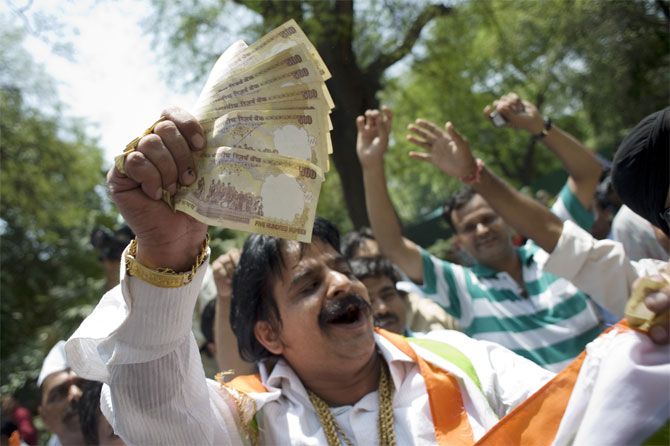 It’s a good time to be a top corporate honcho in India. Companies and the board of directors have become generous in rewarding the top management despite a challenging economic environment.

The combined remuneration for corporate India top management was up 30 per cent in financial year 2015-16, growing at the fastest pace in the last nine years.

This makes CXOs, including owners and promoters, the biggest beneficiaries of a mild recovery in corporate performance during the period.

A typical CEO or managing director took home a salary of Rs 5.5 crore in FY16, up 55 per cent from the previous year. In comparison, corporate India’s equity dividend to shareholders was up 4.7 per cent last year while their salary bill was up only 10 per cent during the period.

The analysis is based on the financials and top management remuneration data of 115 private sector companies (non-PSUs) of the BSE 200 index.  The top management data is for board-level positions such as CEOs, CFOs, MDs, executive director, whole-time directors and chairman. Compensation includes basic pay, perquisites, variable pay and commissions but excludes employee stock options (Esops).

Together, private sector companies paid combined remuneration of around Rs 2,400 crore to their board of directors last year against Rs 1,840 crore a year ago. Their combined net profit was up 11 per cent year-on-year to Rs 2.42 lakh crore last financial year, while equity dividend to shareholders was up 4.7 per cent y-o-y to around Rs 77,000 crore.

Historically, executive compensation has moved in tandem with the growth in corporate profitability. But, the correlation seems have broken in recent years. For example, the top management’s salary for the sample grew at a compounded annual growth rate (CAGR) of 18 per cent in the past 10 years, broadly in line with the 15 per cent CAGR growth in net profits during the period.

In the last five years, however, the director’s pay has grown at a CAGR of 15.8 per cent, two-and-a-half times faster than net profit growth (6.2 per cent) during the period.

Headhunters attribute the divergence to companies’ compulsion to retain top talent in a tough macroeconomic and business environment. “Increasingly, top executives are being paid for their loyalty and ability to manage complexity and steer companies through turbulent times,” says Sanjay Teli, managing director, ESP Global Search.

Corporate governance firms are, however, not happy with this. “There should be close correspondence between corporate performance and the remuneration of the top management. But, this link has broken in recent years, which hurts minority shareholders, whose gains are tied to company’s  performance,” says Amit Tandon, founder and managing director of proxy advisory firm Institutional Investor Advisory Services India (IiAS). He attributes this to a higher proportion of the fixed component in executive salaries, especially in case of promoter-directors.

Others put the blame on promoters of small- and mid-cap firms. “In large firms, there still seems to be a link between corporate performance and top management compensation. But, this correlation seems to have vanished in case of owner-driven  mid and small-size firms. Their promoters take away a disproportionately large share of profits as compensation, eating into the surplus available for minority shareholders,” says Shriram Subramanian, founder and managing director, InGovern Research Services, a proxy advisory firm.

For example, eight of the top 10 earners in FY16 were promoters, with Kalanithi Maran and Kavery Kalanithi, co-promoters of Sun TV, topping the charts.

Together they took home Rs 143 crore, about 16 per cent of the company’s net profit in FY16. Among companies, L&T topped the chart, paying Rs 195 crore to its board of directors, or about 3.8 per cent of its net profit last year. Relative to their size, however, the biggest payers were mid-caps like Apollo Tyres, MRF, Divi’s Lab and Amara Raja Batteries, besides Sun TV.

As a result, quite a few promoters earned more through salary and commissions than equity dividend from their companies, which is unpalatable for proxy advisory firms. “Promoters should largely earn through dividends rather than salary so that their interest is aligned with that of minority shareholders,” says Shriram.