The amount of money lying unclaimed with the Life Insurance Corporation of India dwarfs the budgets of many ministries. There was Rs 21,539.5 crore which lay unclaimed with India’s largest insurance company, according to details in the initial public offer (IPO) document it filed over the weekend.

The regulatory documentation is ahead of LIC selling shares to the public through the stock exchange for the first time this financial year.

This will be India’s largest ever public listing.

Unclaimed amounts include settled claims which haven’t been paid out, sums which become due when policies mature as well as excess amounts paid which are to be refunded.

The largest amount due is because of policies matured but where the money hasn’t reached the investor.

The scale of the outstanding amount is higher than the budgets of many central government ministries. 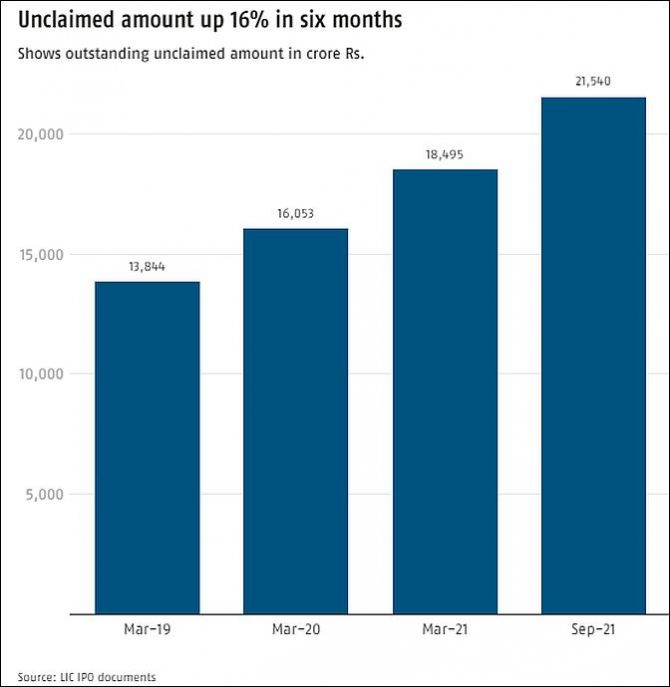 A total of Rs 1,527.6 crore was paid out as claims during the same period.

A large number however, has been pending for a long time.

More than half of the outstanding unclaimed amounts have been pending for three years or more, shows the data which is as of September 2021 data (see chart 2). 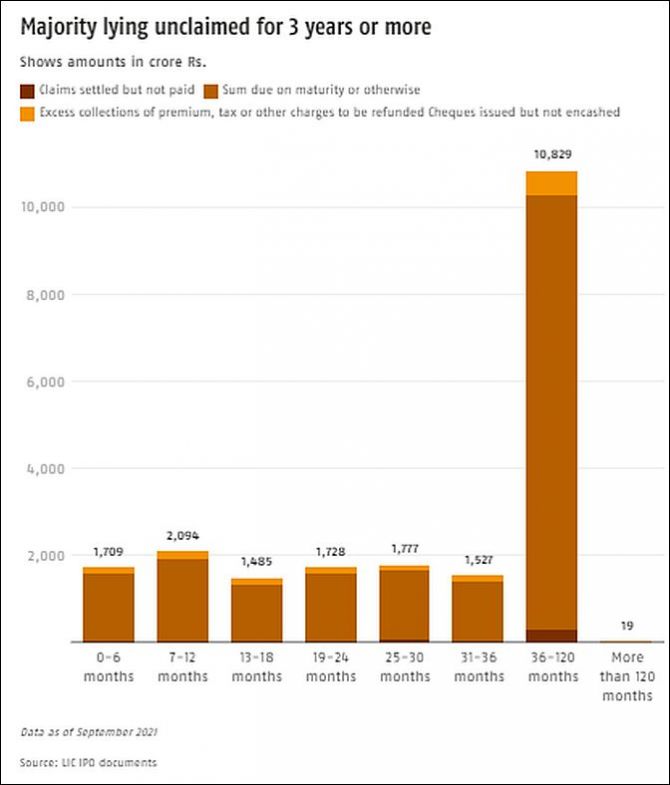 Rules require amounts unclaimed for more than ten years to be transferred to the Senior Citizens’ Welfare Fund (SCWF) under legislation which came into effect in 2015.

“...general and health insurance companies have been notified by the Government of India to be part of the entities who shall be liable to transfer unclaimed amounts to the SCWF instituted pursuant to the Finance Act, 2015 and Finance Act, 2016,” noted LIC’s offer documents filed with stock market regulator, the Securities and Exchange Board of India (Sebi).

LIC’s is not the only unclaimed amount.

There is also another Rs 24,356 crore lying with banks; and another Rs 19,686 crore of stock market related unclaimed investments lying with the investor education and protection fund (IEPF).

The insurer has an option on its website for unclaimed amounts.

It requires the policyholder’s name and date of birth.

The data is updated on a half-yearly basis, according to the website.

The LIC IPO is expected to sell five per cent stake to raise in excess of Rs 60,000 crore.

More than Rs 66 out of every Rs 100 in new business premium goes to LIC.

It has over 283 million policies and over a million agents, according to a statement from the government’s department of investment and public asset management (DIPAM).