When the founder and CEO of MakeMyTrip.com, Deep Kalra, spoke of his plans to expand the company's offline retail stores, the American board members of the Nasdaq-listed online travel firm found the idea revolutionary. 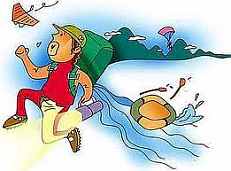 What was perhaps unthinkable for an e-commerce company in the West has been a part of a well-thought-out strategy for leading online travel companies in India. So, Kalra went ahead and expanded the company's brick-and-mortar network across cities, from just a pilot presence initially.

Today MakeMyTrip has 20 outlets in cities like Ahmedabad, Kolkata and Bangalore, among others. For now, however, it is not planning any further expansion of the offline network. Yatra.com, on the other hand, has 40 outlets across the country, and is planning to add another 100 franchisees.

"In the franchisee model, we don't have to invest in the store. It is a healthy way to grow our offline presence in the smaller towns and cities," said Pratik Majumdar, head of marketing and strategic relations, Yatra.com. A retail store takes at least three to four years to break even. While one of the reasons for opening the retail outlets is to hard sell travel packages, the branding opportunity provided by the offline stores is also a big driver.

MakeMyTrip opened stores in its initial days to put a face to its name and establish trust among consumers. "We are seeing good traction in retail outlets. There is no significant advantage that the stores bring in, so we will not add more and we would not even reduce the number," said Keyur Joshi, chief operating officer, MakeMyTrip.com.

For MakeMyTrip, 30-35 per cent of its holidays are sold through its outlets. Holidays itself account for 25 per cent of the total sales. About 95 per cent of Yatra's holiday packages are sold via retail outlets and call centres. And the break-up between ticketing and non-air revenue is 80:20.

"Our marketing communication has also been towards hotels and holidays. We are anyway well known for flights. It is not to say that we will stop investing in that area but the incremental

investment will happen on the hotels and holidays side," said Dhruv Shringi, chief executive officer, Yatra.com.

However, there are also online travel players who do not have any offline presence, like Cleartrip.com or Expedia.com. For Cleartrip, the main business is air ticketing and although it also has an inventory of 4,500 hotels in the domestic market alone, it has no plans of entering the packages business as of now.

"Selling packages requires a lot of handholding. It is very hard to sell it online, especially in the Indian market," said Hrush Bhatt, co-founder and director  product and strategy, Cleartrip.com.

Besides, Cleartrip's focus is to grow its mobile business and retail seems too much of an investment. "The offline market is adequately serviced. It does not need more players," Bhatt added. But, Expedia could possibly consider the option of an offline network.

Since the margins are increasingly getting squeezed in the ticketing business, portals have been lately focusing on holiday packages. In the next few years, MakeMyTrip wants to achieve a 50:50 ratio between its air and non-air revenues.

"We are actively focused on growing the offline business and carefully select serious investors with a passion for the travel industry to partner in retail franchise operations," Joshi added.

Cleartrip, however feels that its small size of just 400 employees justifies the volume of sales it does. For the other two companies, for instance, the large size of employees, with 1,200-1,300 in MMT and 800-900 in Yatra puts pressure on the volume to employee ratio.

The real estate costs are also a deterrent for companies at times, a tourism industry expert said. The returns on the other hand may not be very high for online travel companies which operate on thin margins, he added.

The traditional agents are also trying to enhance their reach. Leisure travel major Cox and Kings has over 120 franchise sales outlets in 70 cities across 20 states in India.  It plans to have 200 franchise outlets by the end of this fiscal. Thomas Cook India has 223 owned outlets across the country and plans to add more stores this year.
Ruchika Chitravanshi in New Delhi
Source: