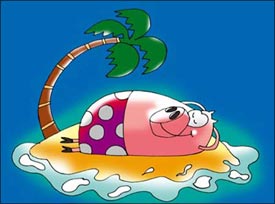 The government on Thursday released the list of 17 holidays for its staff in Delhi for 2012.

However, three of these holidays fall on Sundays and one on a Saturday and hence the effective number of holidays for central government employees is only 13. Employees can avail of two more holidays on their own from the list of 36 restricted holidays that have been notified.

The holidays that fall on weekends are Id-e-Milad-un-Nabi (February 5), Buddha Purnima (May 6), Id-ul-Zuha/Bakr Id (October 27) and Muharram (November 25).

Two holidays fall in a row mid-week on April 5 and April 6 (Thursday and Friday) -- and hence it will be extended holiday of four days for the central staff that week.

Six other holidays are so placed on Thursdays and Tuesdays that an employee can be off work for four days by taking a day's leave.

In case of the central offices outside Delhi, 14 holidays are compulsory, while three others will be decided in consultation with the employees' coordination committees in the state capitals from a list of 12.

A Correspondent in New Delhi
SHARE THIS STORY
Print this article