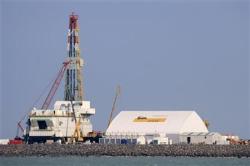 In its biggest acquisition until date, ONGC Videsh Ltd, the overseas arm of Oil & Natural Gas Corp last month agreed to pay US energy giant ConocoPhillips about $5 billion for the 8.4 per cent stake in Kashagan, the biggest oilfield discovery in over four decades.

The deal is subject to the approval of governments of Kazakhstan and India and also to other partners in the Caspian Sea field waiving their right of first refusal.

Industry sources said Italy's Eni, the operator of the first phase of the Kashagan oilfield that is due to start production in second quarter of 2013, has publicly stated that it will not pre-empt or block the sale.

Eni, ExxonMobil of US, Royal Dutch Shell, France's Total and Kazakhstan's Kazmunaigas (KMG) hold 16.81 per cent stake each in the field, while Japan's Inpex the remaining 7.56 per cent.

Sources said the partners have 60 days to decide on exercising their right of first refusal on ConocoPhillips' stake.

Once all the other five companies in the project waive their pre-emption rights, the deal will go before Kazakhstan government, which contractually has 180 days to clear it.

Sources said on the previous two occasions when companies sold out of Kashagan, the other partners pre-empted.

Originally, Kashagan field had Eni, BG Group of UK, ExxonMobil, Shell, Total and Kazakh government with 14.28 per cent stake each. BP had 9.52 per cent and Norway's Statoil 4.76 per cent.

Inpex of Japan and ConocoPhillips entered the consortium in 1998, purchasing Kazakhstan's 14.28 per cent

In 2001, when Total agreed to buy BP and Statoil's stakes, all other partners exercised their pre-emption rights and the stake was equally split among them. Subsequently, the shareholding in the project was - BG, Eni-Agip, ExxonMobil, Shell and Total (16.67 per cent each), ConocoPhillips and Inpex (8.33 per cent each).

Then again in 2003, when BG agreed to sell its 16.67 per cent interest to Chinese state duo Sinopec and China National Offshore Oil Corp (CNOOC), the pre-emption rights were exercised. Kazakhstan purchased half (8.33 per cent) of BG's share while other consortium members shared the remaining.

In 2008, a new contract was signed wherein KMG's share was doubled from 8.33 per cent to 16.66 per cent with other partners taking proportionate cuts.

Under Kazakh law, KMG would have the first option to purchase Conoco's stake and in October the company had publicly expressed interest in Conoco's holding.

After years of delay and at a total cost of more than $40 billion, Kashagan is due to begin production in second quarter of 2012, sources said.

Kashagan holds 33 billion barrels of inplace oil reserves, of which about 10 billion are potentially recoverable. Of this, OVL's share will be 842 million barrels.

The Kazakhstan government has approved first of the three phases and production is likely to start in second quarter of 2013.

At approved peak from phase-1, OVL's share will be close to 1.6 million tonnes, sources said adding over 25-year period the company's share comes to an average of 1 million tonnes per annum.

When Phase 2 and 3 are implemented, the OVL's share will be significantly higher, they added.
© Copyright 2022 PTI. All rights reserved. Republication or redistribution of PTI content, including by framing or similar means, is expressly prohibited without the prior written consent.