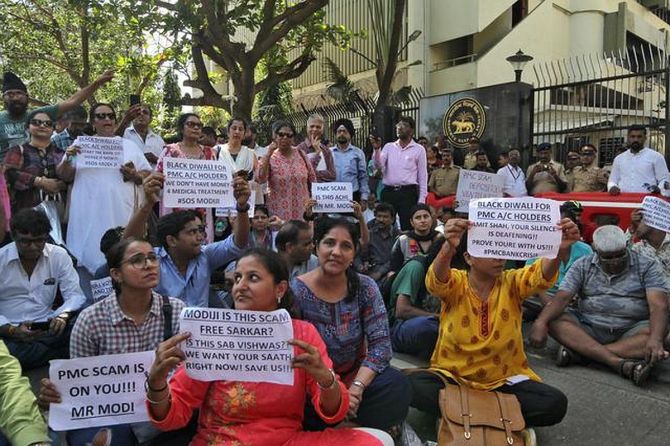 For depositors of the tainted Punjab and Maharashtra Cooperative (PMC) Bank, the situation is not very different from what it was almost a year ago when the RBI placed withdrawal restrictions on the bank after the mega scam involving misreporting of loans with senior bank officials' involvement came to light.

Exactly one year ago, on September 23, 2019, the Reserve Bank of India had superseded the board of the multi-state urban cooperative bank and placed it under various regulatory restrictions after detection of certain financial irregularities.

There are many senior citizen depositors whose life savings are stuck in the fraud-hit bank.

"We have organised a lot of morchas (protest), met RBI officials, politicians but nothing has happened. We are really disappointed," said S Borkar, one of the depositors of the bank.

According to PMC Bank Depositors' Association member, Anita Lohia, the RBI has allowed depositors to withdraw Rs 1 lakh in the last one year which is a meagre amount for anyone.

"The day when the restriction was imposed on PMC Bank, we had thought that the situation will get normalised in few days or months.

“It's been one year but nothing has happened.

“With just Rs 1 lakh, it is really difficult for us to sustain life for an entire year in a city like Mumbai," Lohia said.

According to her, nearly 70 PMC bank depositors have lost their lives in the past one year.

Depositors had planned to organise a protest in front of RBI's headquarters in the Fort area on Wednesday but they couldn't get permission from the police, she added.

They, however, have some hope from the passage of amendment to the Banking Regulation Act to bring cooperative banks under the supervision of the RBI.

"We hope for some resolution soon with passage of (amendment to) the bill," Lohia said.

The bank has a strong presence in Maharashtra with 103 out of its 137 branches situated in the state.

Of the 103 branches, nearly 81 are in Mumbai and adjoining areas such as Thane, Navi Mumbai and Palghar.

When contacted, Dixit said the focus will be on finding a solution to revive the cooperative bank so that the interest of the depositors is protected.

"My only aim is to revive the bank and save the interest of the depositors whose money is stuck up there,” Dixit told PTI.

The team at the bank is working to find a viable and permanent solution so that depositors get access to their entire money, he said.

The RBI on Tuesday also said huge losses and erosion of deposits at PMC Bank continue to cause hindrance in its revival.

“While the administrator of PMC bank and the RBI have been exploring various options for resolution of the bank, several factors such as huge losses incurred by the bank resulting in its entire net worth getting wiped out, steep erosion in deposits, etc. continue to pose serious challenges in finding a workable plan for revival of the bank,” RBI said on Tuesday.

It said the bank has also been making efforts for recovery of NPAs although progress has been constrained because of the COVID-19 pandemic and legal complexities.

Nevertheless, in the interest of depositors, the PMC Bank and the RBI are continuing to engage with stakeholders to explore the possibility of finding a viable and workable solution for the resolution of the bank, RBI further said.

PMC Bank had hidden and misreported loans given to real estate developer HDIL.

The misdoing at the bank was leaked by one of its board members to the RBI, forcing its former managing director, Joy Thomas, to confess to the regulator about misreporting of loans.

Thomas along with the bank's former chairman Waryam Singh were arrested in October last year.

The Economic Offences Wing (EOW) of Mumbai Police had later arrested few more officials of the bank in the fraud case.