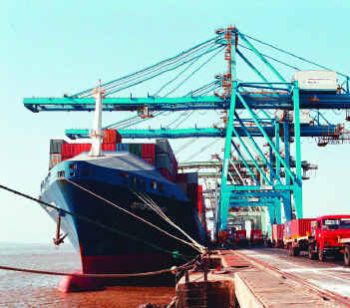 Operations were suspended at India's busiest container terminal, Jawaharlal Nehru Port, as authorities attempted to contain damage from the collision of two cargo vessels off the coast of Mumbai on Saturday.

Several cargo containers abroad one of the ships were flung into the sea following the accident, which also triggered an oil slick along the Mumbai coast.

The Indian Coast Guard has pressed into service several boats and helicopters in an attempt to stem the fuel leak, but some officials said the operation has met with only limited success so far and the spill was now threatening areas hundreds of kilometres away from the collision site.

The Jawaharlal Nehru Port Trust has, meanwhile, sought the services of experts from SMIT Salvage, a Netherlands-based company involved in emergency response and wreck removal operations.

The experts are expected to reach Mumbai by Wednesday.

However, in a statement issued late in the evening, the Director General of Shipping said effective salvage operations can begin only by the end of the month when the weather improves.

Many of the 120-odd containers that fell in the sea are still floating, making navigation in the area difficult. A fourth of them contain, what the DG Shipping termed, dangerous cargo.

"Heavy oil spillage can be sighted from the ship's fuel tanks," the statement added.

MSC Chitra, operated by Mediterranean Shipping, has shed at least 400 boxes of hazardous chemicals, such as phosphatic pesticides and sodium hydroxide since its collision with MV Khalijia 3. MSC Chitra is now lying on its side in the Arabian Sea.

According to agency reports, Prime Minister Manmohan Singh has sought a report from the shipping ministry on the oil spill, even as the government initiated legal action against the owners of the two cargo ships.

"The Maharashtra State Pollution Control Board has already initiated legal action against the owners of the ships," Environment Minister Jairam Ramesh told the Rajya Sabha.

"The channel is not navigable; it cannot be operated," said N M Kumar, deputy chairman, JNPT. He said the floating containers could endanger ships on the route.

The DG Shipping said JNPT is closed during the night and only a 'few movements of ship were undertaken during the day'.

JNPT handled 4.1 million containers in the year ended March 30, 2010. Total cargo tonnage, including commodities and other types of freight, rose 6 per cent to 60.7 million tonnes in the year.

The closure will have a huge impact on congestion and vessel movements.

"JNPT handles about 60 per cent of India's container traffic, so its closure would definitely impact the industry," said Param Desai, an analyst with Angel Broking.

It will also impact companies which are involved with the transportation of containers and its warehousing. Gateway Distriparks, Allcargo Global Logistics and Container Corporation of India are some of the companies who would be affected.

"The industry at large will also get a hit as the overall import and export will be impacted," said Desai.

Meanwhile, fears that ocean currents were spreading oil from the spill flared after tar balls turned up in some coastal areas towards Raigarh, about 100 km from Mumbai.

Scientists at Bombay Natural History Society have found fresh on-shore oil debris -- some up to six inches in depth -- in coastal regions along south of Mumbai towards Raigarh along with tar balls in some places.

A Coast Guard official said oil spill has reached the beaches of Alibag, Marva, Sewree and Elephanta Caves besides Mumbai mangroves. Fishermen have been warned not to venture into the sea.

The oil spill has also ignited concerns over use of sea water by Bhabha Atomic Research Centre.

The country's premier atomic establishment has been asked by the Coast Guard not to use sea water for its facilities in wake of the oil spill. BARC uses sea water for its two research reactors -- Dhruva and Cirus -- for cooling purposes.

The shipping ministry will submit a detailed report on the issue to the cabinet secretary.

"A committee of secretaries will hold a meeting tomorrow to discuss the matter," a senior official in the shipping ministry said.

Maharashtra's Environment Minister Suresh Shetty told Business Standard: "About 400 tonnes of oil has leaked and the current rate of leakage is two to three tonnes an hour. In case the fuel tank ruptures, further leakage can happen."

Shetty said an FIR has been lodged against the captains and crews of both the ships. The Director-General of Shipping has also ordered an enquiry.