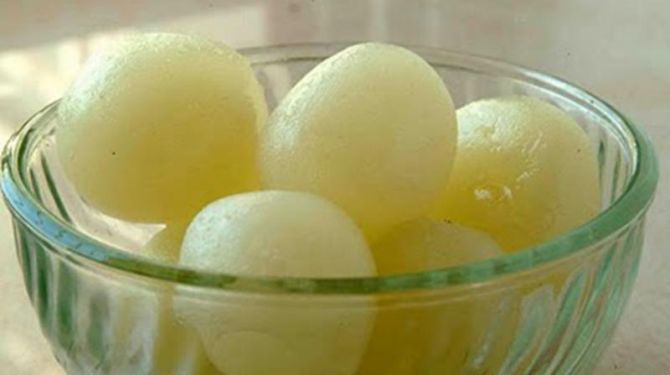 Odisha on Monday bagged the much-awaited Geographical Indication (GI) tag for its 'rasagola', a syrupy confectionery made of cottage cheese, official sources said.

A GI tag recognises a product as distinctive to a particular locality or region.

Welcoming the development, Odisha Chief Minister Naveen Patnaik said 'rasagola' is loved by the Odiyas across the globe.

“This mouthwatering culinary delight made of cottage cheese, loved by Odias across the world, is offered to Lord Jagannath as part of bhog since centuries," Patnaik tweeted.

"Offered to Lord Jagannath as bhog, the #OdishaRasagola is an inseparable & ancient part of Odia culture & cuisine.

“GI tag for #OdishaRasagola is yet another time for us Odias, to celebrate with a bite of the mouth watering delicacy," Pradhan tweeted.

Leader of Opposition in the Assembly Pradipta Naik claimed that the state should have earned the tag long ago.

"It got delayed due to negligence on the part of the state government," the BJP leader said.

The application for the GI tag for 'Odisha Rasagola' was moved by Odisha Small Industries Corporation Limited (OSIC), together with Utkal Mistanna Byabasayee Samiti (association of sweetmeat traders) in 2018.

'Rasagola' has been a part of the state's centuries-old rituals performed for Lord Jagannath and found its mention in a 15th century Odia epic 'Dandi Ramayana'.

As per the rituals of "Niladri Bije", 'rasagola bhoga' is traditionally offered to Devi Lakshmi on behalf of Lord Jagannath.

Legendary writer Fakir Mohan Senapati had written about 'rasagola' in Utkal Bhramanam, which was published way back in August, 1892.

The popularity of the confectionery can also be gauged from a travelogue written by Senapati in 1904.

Noted researcher Asit Mohanty, who had submitted a report to the government claiming that 'Rasagola' has been mentioned in ancient Odia literature, said people in the state had been relishing the sweetmeat for more than 500 years.

Bhubaneswar
© Copyright 2021 PTI. All rights reserved. Republication or redistribution of PTI content, including by framing or similar means, is expressly prohibited without the prior written consent.