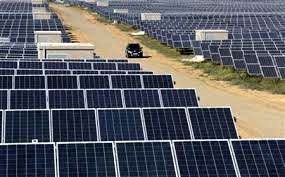 "World Bank will provide 50 per cent soft loan for setting up the ultra mega solar power project. The rest will be borne by the joint venture of Centre and the state. A team of World Bank team has visited Gudh and found the tract of barren land for commissioning the project most appropriate," Shukla, told reporters.

Shukla, who is also New and Renewable Energy Minister said that Asia's biggest solar power plant having the capacity to generate 130 mw was already functioning in MP's Neemuch district.

He said that Central government has already included MP in the green corridor and granted Rs 2,100 crore (Rs 21 billion) the to state under it. He said Centre has granted Rs 233 crore (Rs 2.33 billion) as encouragement money to the state for promoting new and renewable energy sources.

The minister said 1300 mw power had been tapped in last 12 months and the government was providing round-the-clock power to households across the state.

He said 10-hour power supply was being augmented to agriculture farming purposes on daily basis.

He said that the department has cracked a whip on mining mafias and recovered Rs 50 crore as fine from them.