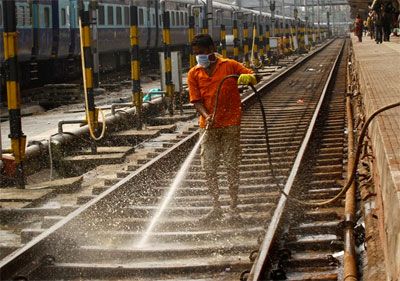 Rail tracks in a stretch of 175 km will not be strewn with human excreta from October 2 with installation of bio-toilets on trains plying on two routes, marking completion of the first year of the launch of Swachh Bharat Campaign by Prime Minister Narendra Modi.

Indian Railway has undertaken an initiative to make 367 km of tracks free from discharge of human waste from toilets on trains in the current fiscal. Of these, 175 km will become discharge-free on October 2.

To begin with, the 141 km Kanalus-Dwarka-Okha and the 34 km Porbunder-Wansjalya sections will become "zero toilet discharge" routes on October 2, said a senior Railway Ministry official involved with the exercise.

Trains on the Jammu-Katra section, covering 78 km, and the 114 km track between Rameswaram and Manamadurai stations will be equipped with bio-toilets by March next year.

About 40 trains run on the identified 367 km-long tracks and bio-toilets will be installed on each of these by the end of this fiscal, said the official.

The Railway had launched PM's clean India initiative on October 2 last year with the then Railway Minister Sadanada Gowda leading the campaign with a broom in hand at New Delhi station.

"Efforts are on to achieve the unique milestone on Gandhi Jayanti day as part of the Swachh Bharat mission," the official said.

In the bio-toilets, seen as a sustainable solution to India's sanitation challenges, the waste is digested by specially developed bacteria and only a small amount of clean water is discharged.

Indian Railway has installed more than 17,000 bio-toilets on trains till March 2015 and set a target for as many more this financial year.

It costs about Rs 3 lakh to install four bio-toilets in a coach and about 6000 coaches are now fully equipped with the facility.