Fugitive diamond merchant Nirav Modi, wanted in India on fraud and money laundering charges amounting to USD 2 billion, is set to appear before Westminster magistrates court in London on Friday, when his legal team will make a second bail application. 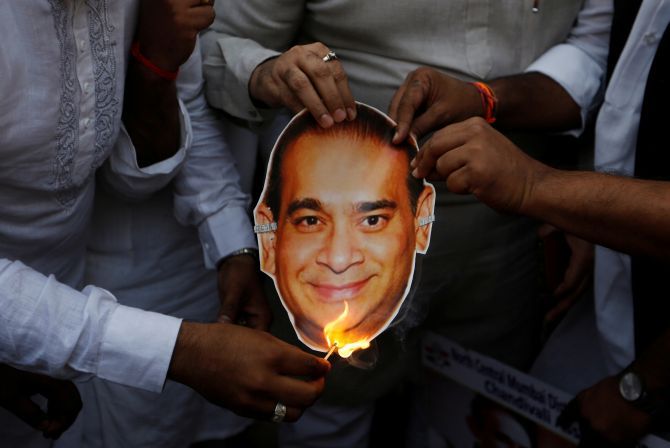 The 48-year-old had been denied bail by district judge Marie Mallon at his first hearing soon after his arrest by Scotland Yard officers from a central London bank branch as he tried to open a new bank account and has been in custody at HMP Wandsworth prison in south-west London since last Wednesday.

"He is expected to be produced before the court for a second bail application hearing on March 29," a court official confirmed on Tuesday.

Crown Prosecution Service barrister Jonathan Swain, arguing on behalf of the Indian authorities, had objected to Modi's bail plea during last week's hearing, stressing that he was wanted in India for "high value and sophisticated" fraud and money laundering amounting to USD 2 billion.

Judge Mallon had ruled in favour of the Indian authorities, saying that she was convinced Modi had the means and incentive to jump bail and "fail to surrender".

The next hearing in the case is expected to be presided over by chief magistrate Emma Arbuthnot, the judge who ordered the extradition of former Kingfisher Airlines boss Vijay Mallya to India last December. That case is currently in the UK high court as part of Mallya's application seeking leave to appeal against her ruling.

"Further to the Mallya case, India now has a template to refer to when dealing with the extradition procedure of Nirav Modi from the UK," said Sarosh Zaiwalla, founder and senior partner at UK-based law firm Zaiwalla & Co.

It remains to be seen how they would further bolster that offer in order to convince the judge to grant bail during the second hearing, following which the case will proceed to a series of case management hearings and setting of a trial date.

During Modi's first court appearance after his arrest last week, it emerged that the diamantaire accused of defrauding India's state-owned Punjab National Bank (PNB) via fraudulent Letters of Undertaking (LoUs) had been working on building up his legal team against extradition proceedings since March last year.

In July 2018, once the Indian authorities had sent their extradition request to the UK Home Office, he hired Boutique Law -- a specialist law firm specialising in extradition. Anand Doobay of Boutique Law, who was present in court last week, has been the solicitor in charge of the Mallya extradition case as well.

He, along with barrister George Hepburne Scott, make up Modi's defence team and sought to establish their client's "full engagement” with UK authorities and willingness to cooperate.

"He strongly contests the allegations… has a wealth of material in support of his case,” Hepburne Scott told the court, indicating that political motivation and human rights violations in an Indian jail will form part of Modi's "comprehensive" defence strategy.

His team also contested his fugitive status, claiming that Modi arrived in London in January last year before any of the allegations emerged and has maintained a very “visible” presence in the UK ever since.

The court was told that he has a contract of employment with Diamond Holdings Ltd in London for a monthly salary of 20,000 pounds since October last year and has been paying his local council tax.

Besides the passports, Modi also possesses multiple residency cards, some of them expired, but covering countries such as the UAE, Singapore and Hong Kong.