Senior Congress leader Shashi Tharoor on Tuesday attacked the Centre over the glitches in the new income tax portal, alleging that even after spending Rs 4,200 crore on it, the government had "failed" to make it user-friendly and created a "mess" instead. 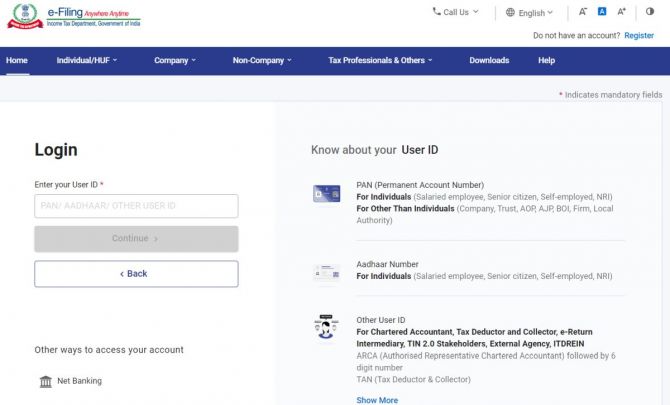 Tharoor, who is the president of All India Professionals' Congress, the Congress's unit comprising professionals, said chartered accountants in the unit have informed him that the change of income tax portal has been disastrous, with glitches including longer than usual logging time.

Almost all features of the new portal are non-operational, so ITR (income tax return) filing, 15 CA/CB forms, data preparation for appeals has ground to a halt, the former Union minister said.

"Not clear why the government chose to change the income tax portal in June. Would have been wiser just before the end of the financial year or the start of the next one, so that taxpayers eligible for income-tax refund could have received help in these difficult times," Tharoor opined.

Hitting out at the government, he asked what was the need for a new income tax portal when the old portal was running smoothly for years and why was the portal switched at peak time, when income tax payers usually file their returns and claim refunds.

Why was no testing of the new portal done before its launch, Tharoor asked.

"The rationale for a new portal is to provide a more user-friendly, modern and seamless experience to users. However, even after spending Rs. 4,200 cr on its renovation, the govt has failed to attain the objective & created a mess instead," he said in a series of tweets.

This is a replay of the chaos with the GST portal, Tharoor added.

Noting that India has very few taxpayers per capita and a "culture of tax evasion and black money", the Congress leader said this must be the first time in history that Indian taxpayers who want to pay their taxes are not able to pay because the income tax portal is not working.

"Penalties should be imposed and heads roll," Tharoor said.

His remarks come a day after the income tax department extended the deadline till July 15 for manual filing of forms related to foreign remittances.

As the new I-T portal faced technical issues after its launch on June 7 and users complained of glitches, the department had allowed manual filings of Form 15CA/15CB (required for foreign remittances) with banks till June 30.

The new portal was launched on June 7, which the tax department as well as the government said was aimed at making compliance more taxpayer-friendly.

As the website continued to face glitches from the first day of its launch, Finance Minister Nirmala Sitharaman had asked Infosys -- the vendor who developed the site -- to fix the issues on priority.

In a meeting with Infosys top officials on June 15, Sitharaman had asked Infosys to address all issues without further loss of time, improve their services, and redress grievances on priority as it was impacting taxpayers adversely.

Infosys officials on their part had said that they were working to fix the technical issues and that they have augmented the resources for execution of the project on the hardware as well as the application side and that some of the issues have already been identified and fixed.

For the other remaining technical issues, Infosys had assured the government that their teams were working on them and gave the expected timelines within which the issues would be resolved.