Prime Minister Narendra Modi has held talks with Chinese President Xi Jinping in Brasilia and the two leaders agreed to maintain a close contact on matters relating to trade and investment to further deepen and add new vigour to the bilateral ties. 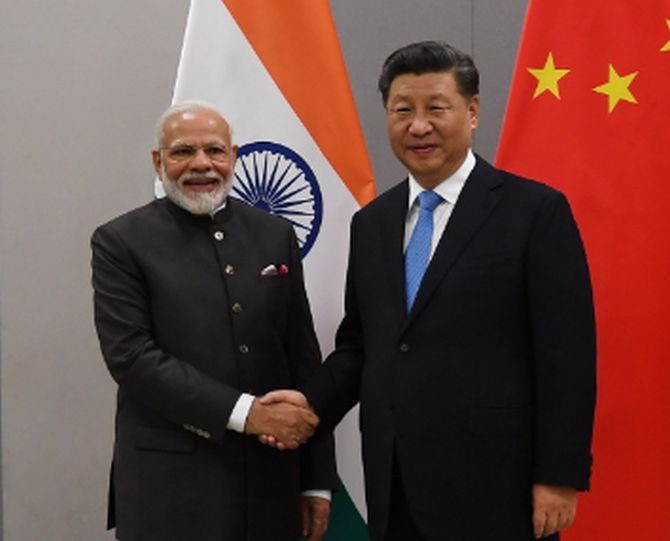 During the meeting on the sidelines of the 11th BRICS Summit on Wednesday, prime minister Modi said there was a "new direction and new energy" in bilateral ties after the two leaders' second informal summit in Chennai.

"Fruitful meeting between PM Narendra Modi and President Xi Jinping on the sidelines on the BRICS Summit in Brazil. Trade and investment were among the key issues both leaders talked about," the Prime Minister's Office said in a tweet.

The leaders had forward-looking discussions on various aspects of the multifaceted India-China relationship, External Affairs Ministry Spokesperson Raveesh Kumar said in a tweet.

They both agreed on the importance of maintaining close dialogue on matters relating to trade and investment. The two leaders agreed that the new high level mechanism on trade and economy should meet at an early date, an official statement said.

"I am glad to meet you once again. When I look back, we had met for the first time in Brazil itself... and our journey began. This journey of unknown people has today turned into a close friendship. Since then, we have met at many forums, bilaterals; you visited my home state, took me to your village, came to receive me outside Beijing in Wuhan.... It is such a significant thing that within the five years, there have been so much trust and friendly relations," Prime Minister Modi told President Xi.

"As you said and I believe that our meeting in Chennai gave our journey a new direction and new energy. Without any agenda, we talked about each other's issues, global situations... these have been very successful," Modi said.

The two leaders met for the second informal summit at Mamallapuram, a coastal town near Chennai, on October 11-12 and discussed a range of bilateral issues, vowing to jointly combat terrorism and radicalisation, and expand bilateral trade and investment.

Xi conveyed his deep appreciation to Modi for hosting him at the second informal summit in Chennai and said that he would not forget the welcome given to him by the prime minister and the people of India.

He invited Modi for the 3rd informal summit in China in 2020. The date and venue for which will be determined through diplomatic channels.

The two leaders reviewed preparations for celebrating the 70th anniversary of establishment of diplomatic relations between the two countries next year. They agreed that this will enhance people-to-people relations.

The leaders noted that the special representatives will have another meeting on matters relating to the boundary question and reiterated the importance of maintaining peace and security in the border areas.

The leaders also exchanged views on multilateral issues including WTO, BRICS and Regional Comprehensive Economic Partnership (RCEP) at the BRICS Summit held to focus on building mechanisms for counter-terrorism cooperation and strengthen India's ties with the world's five major economies.

The meeting between Modi and Xi in the Brazilian capital comes days after India decided not to join China-backed RCEP over unresolved "core concerns", with India saying the proposed deal would have adverse impact on the lives and livelihoods of all Indians.

It also took place amidst renewed strain in ties between the two countries over the Kashmir issue. A joint statement issued after talks between President Xi and Pakistan Prime Minister Imran Khan last month said China was paying "close attention" to the situation in the Kashmir and that it should be properly and peacefully resolved based on the UN Charter.

In its reaction, External Affairs Ministry Spokesperson Raveesh Kumar said India's consistent and clear position has been that Jammu and Kashmir is an integral part of the country and China is well aware of New Delhi's position.