'Silicon Valley is the best model for driving growth and innovation. Meeting the right people who care about India is a fantastic step. India today stands out as the large potential global economy for growth.'

Ritu Jha/Rediff.com reports from California, ahead of Narendra Modi's visit to Silicon Valley next week. 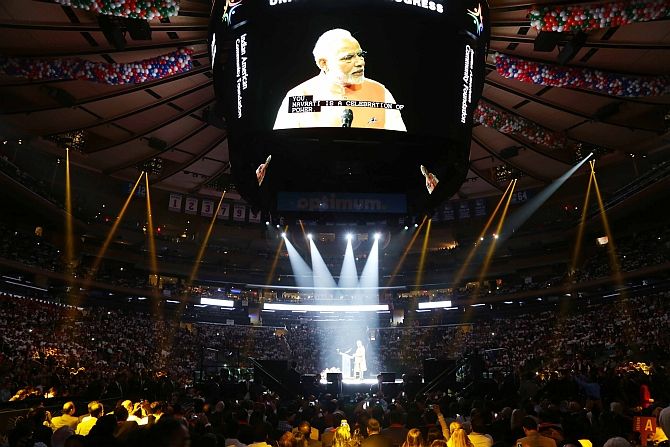 CEOs, prominent investors, venture capitalists and, of course, successful IT entrepreneurs are expected to attend the event.

On Sunday, September 27, at 9:30 am Pacific Standard Time, Modi will visit the Facebook headquarters for a town hall event and take questions from the attendees.

He will also speak at a 'Start Up Conclave,' which will showcase India's best and brightest companies.

"This visit is important for people who care about India," Shukla added. "There are issues which we are going to discuss with the prime minister, on how to replicate the magic of Silicon Valley in India."

"There are policy issues and regulations in India, the coordination between different agencies -- the RBI, the tax department, SEBI (the Securities and Exchange Board of India) and corporate laws, how can they work together to make the life of investors or a start-up easier in India? How do they benchmark against the best practices?" Shukla said, highlighting the likely issues to be discussed at Modi's meeting with the CEOs.

"Investment in India should be easier. Going through Mauritius is not the most convenient way to do it," Shukla -- who raised the same issue along with other venture capitalists when Finance Minister Arun Jaitley visited Silicon Valley in June -- said.

Another issue that is likely to come up is about how long it takes to shut down a company in India because a majority of start-ups fail. Investors want the Indian government to allow companies to quickly wind up, so that the founders and board members can focus their energy on the next venture.

"We want the government to adopt policies to help companies start quickly and shut it down without a cumbersome process if it does not turn out to be a success. We would also like the Indian government to ease norms to bring capital to India and get money out of India in case of an exit quickly," Shukla said. "These are the four big areas if regulated can bring the best practices in the world."

The 'Start-Up Conclave,' Shukla he said, would focus about "what start-ups in India can learn from Silicon Valley. Over 60 to 70 people from 30 start-ups will be coming from India as a part of Modi's business meetings. They want to showcase innovation in India."

"Silicon Valley is the best model for driving growth and innovation," Raju Reddy told Rediff.com, "Meeting the right people who care about India is a fantastic step."

"India today stands out as the large potential global economy for growth," Reddy added. "We see India becoming the next major growth engine of global business."

"I am going to focus on venture capital, how its risk taking nature and patience deserves special treatment for the growth of the start-up ecosystem," Kanwal Rekhi told Rediff.com

Last year, TiE Silicon Valley launched the Billion Dollar Babies (B$B), a first-of-its kind initiative to identify and nurture product companies from India that have proven domestic traction and have the potential to go global.

When asked if this is the right time for Prime Minister Modi to visit Silicon Valley, when China's economy is in slide mode, Shukla said, "There is so much willingness among people to come to India for its own intrinsic merit."

"India gets only $5 billion of foreign capital for start-ups annually. China gets $50 billion a year for start-ups," Shukla pointed out.

"I don't think India should ever be compared with China," Jaideep Tandon, joint director for both Infinx Services and the Tandon Group and an angel investor, told Rediff.com "China is going to be the world's largest economy very soon. India is nowhere near that."

The service industry, Tandon explained, has done well in India, but over time manufacturing has to pick up. Policy changes are necessary to address the 80 per cent agriculture-based Indian economy, he added, because that is where the masses are and any improvement in their livelihood is what will make an impact in India.

"India is very open, innovative and that is why US companies want to invest in India," Tandon, who visited China recently, said.

"Innovation in China is happening, but it is going to be stopped by its government. Their own government who started innovation has started curtailing it," Tandon added. "In India it is different, we need government to work towards planning infrastructure and heavy headed policies." 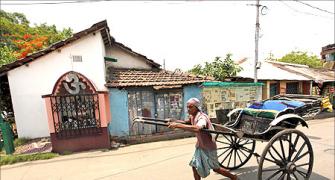 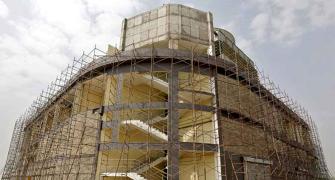 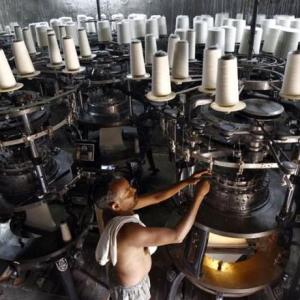