India's growth presents a win-win partnership for the country and the US, and American companies have a great opportunity to contribute to that, Modi told the CEOs. 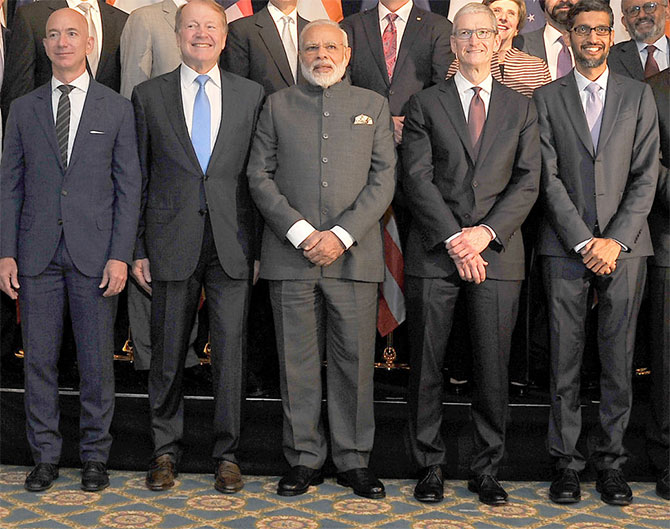 Prime Minister Narendra Modi on Sunday said India has now emerged as a business-friendly destination, more so with the upcoming implementation of the landmark GST beginning next month, while asking CEOs of top US companies to invest in the country.

Modi also said India attracted largest foreign direct investment (FDI) as a result of the National Democratic Alliance government’s policies in the last three years, during his interaction with a group of CEOs of top 20 American firms.

In a round table interaction with the group, including Tim Cook of Apple, Satya Nadella from Microsoft, Sunder Pichai from Google, John Chambers from Cisco and Jeff Bezos of Amazon, Modi listed out steps taken by his government in the last three years and next moves.

"The whole world is looking at India. 7,000 reforms alone by GOI for ease of (doing) business and minimum government, maximum governance,” Gopal Bagley, spokesman of the Ministry of External Affairs said in a tweet from inside the meeting, quoting the prime minister.

India's growth presents a win-win partnership for the country and the US, and American companies have a great opportunity to contribute to that, Modi told the CEOs, according to Bagley.

"The implementation of the landmark initiative of GST could be a subject of studies in US business schools," Modi said.

During the hour-long interaction, at the Willard Hotel, where he is staying, Modi gave a patient hearing to the wish-list of the CEOs. 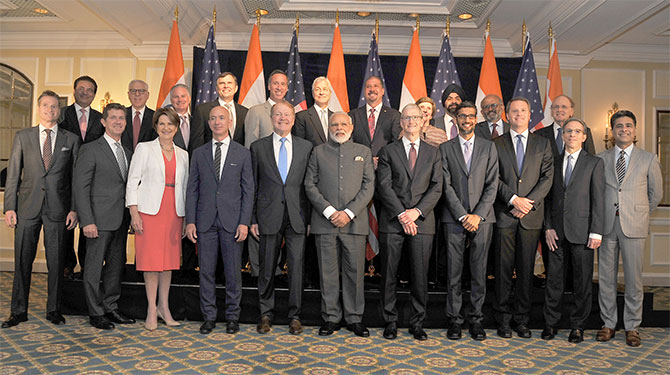 Image: Prime Minister Narendra Modi with the CEOs of 21 corporations in Washington, DC, on Sunday.

Mukesh Aghi, president of the US India Business Council, was also present at the meeting.

Posting a group picture of the prime minister with the CEOs, Bagley said, "strengthening the Indo-US economic partnership".

In a recent policy document, USIBC said the US-India commercial and strategic relationship supports global security, promotes economic growth and creates jobs for both countries and the global economy.

"Today, as we witness a paradigm shift in the erstwhile global order, an opportunity has emerged for both countries to set new standards in bilateral ties that will be bound by their shared values," USIBC said. Noting that US-India trade has tripled over the last decade, reaching a historic high of nearly $110 billion in 2015, USIBC said there is an opportunity for both the countries to also sync their regulatory and standards system to increase trade and investment.

In a separate statement, Jagdip Ahluwalia, executive director of Indo American Chamber of Commerce of Greater Houston, said the United States and India share a very symbiotic relationship, and Modi’s first face to face visit with Donald Trump is important to strengthen the relationship between the two.

"On behalf of Houston, the energy capital of the world and home of the world's largest Medical Center the IACCGH and the strong Indian American community hope to welcome Prime Minister Modi to Houston in the not too distant future,” Ahluwalia said. 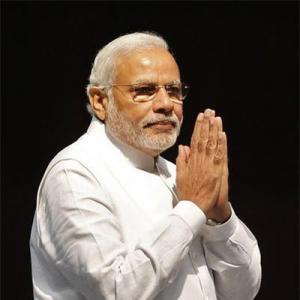 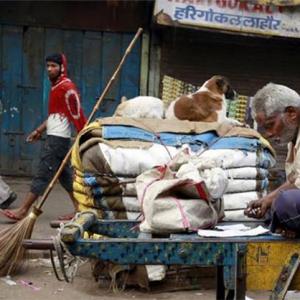