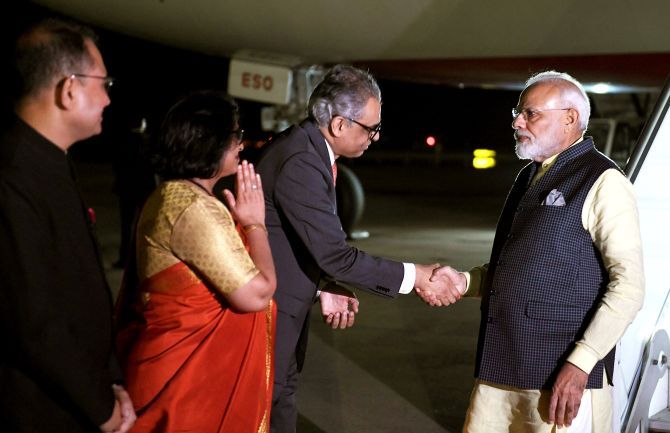 IMAGE: Prime Minister Narendra Modi being welcomed by India's Permanent Representative to the United Nations Syed Akbaruddin and colleagues on his arrival in New York on September 23, 2019. Photograph: ANI Photo.

Modi is among the first set of speakers at the Summit's opening ceremony, a highly significant gesture given that only those heads of state, government and ministers are invited to speak at the summit who will have any “positive development” to announce on climate action.

India's important role and contribution to global climate action efforts have been underlined by the fact that Modi is the fourth speaker at the Summit, after Guterres, New Zealand Prime Minister Jacinda Ardern and President of Marshall Islands Hilda Heine. German Chancellor Angela Merkel will speak after Modi.

India's Permanent Representative to the UN Ambassador Syed Akbaruddin told PTI in United Nations that India's approach to climate action is multifaceted because “anything that we do has an impact, which is global in nature.”

He said the Indian prime minister could articulate his ambition towards renewable energy as well as propose a coalition of nations for disaster resistant infrastructure, similar to India's leadership of the International Solar Alliance.

“So we are not looking at one area, one segment, we are looking at certainly renewable energy because energy is a key component. Also we are an energy-thirsty country so our needs of energy are huge and renewables are increasingly going to play a key role in that. What PM Modi will perhaps articulate is his ambition for renewables in the future beyond what was promised in 2015,” Akbaruddin said.

The Paris Climate Agreement was signed in 2015 and aims to strengthen the global response to the threat of climate change by keeping a global temperature rise this century well below 2 degrees Celsius above pre-industrial levels and to pursue efforts to limit the temperature increase even further to 1.5 degrees Celsius.

Modi has said that India has a capacity of 4GW and the country has set a target of adding 100 GW of solar power by 2022.

Guterres, while speaking to a select group of journalists at a special luncheon last week, said that in the Climate Action Summit only those heads of state and government and members of coalitions will speak who “come with positive steps. So there is a kind of a ticket. You can speak only if you have come to announce something positive,” he said.

Guterres said while the UN is not making judgments about climate action efforts by nations, he asked them if they are ready to announce a positive development at the summit before inviting them to speak at it.

“If you have positive things to announce, you will be given the floor (at the Climate Action Summit). That was the criteria.

It is noteworthy that only around 63 nations have been invited to speak at the summit. The US, Brazil and Japan are not speaking at the high-level event.

Akbaruddin further said that India is expected to talk about the Coalition for Disaster Resilient Infrastructure, a group of about 30 plus countries that will work towards common goals of having infrastructure, which is resilient to climate and disaster. India is working with countries like the UK and small island states like Fiji and Maldives who face problems of climatic nature.

"So (India) will bring to the table this coalition as a tangible demonstration of our willingness to work in partnerships,” he said.

Akbaruddin added that India has the ability to convene people or countries that are not only geographically different but economically diverse as well. India, a member of the G-20, has many friends who are developing countries.

“So what we intend to do is to leverage that ability to work across the board and to bring to the table a group of countries who are ready to address issues of infrastructure. Whenever there is a cataclysmic climate event, infrastructure gets undermined and overwhelmed very quickly, and it becomes very difficult for developing countries or countries who do not have economic wherewithal to address these,” he said.

Further, India is expected to address issues about water preservation and sustainable use of energy by the transport sector.

“India is a water stress country and efforts we will do about preservation of water, how we will try and address water related issues is another major aspect,” he said.

Akbaruddin further said that transport and heavy transport are key users of energy and India will see how it can address the challenges and make them more sustainable.

“There are a whole host of issues that we will address in a holistic manner, but all will be tangible, very action-oriented and will be focused,” he said.

Yoshita Singh in United Nations
© Copyright 2021 PTI. All rights reserved. Republication or redistribution of PTI content, including by framing or similar means, is expressly prohibited without the prior written consent.