These things are cheaper than equivalent branded drugs, to patients, says Modi 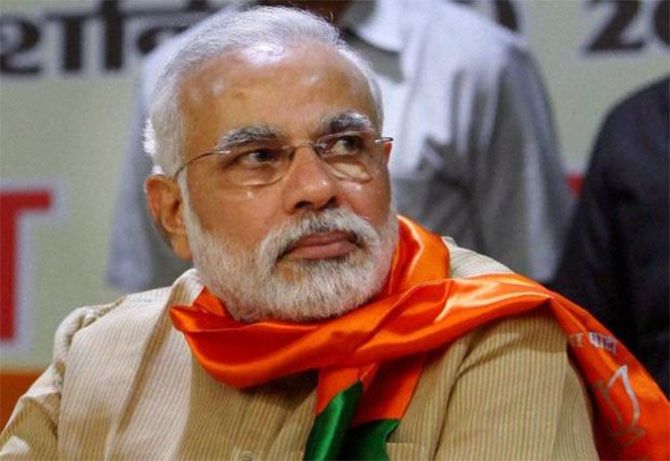 Prime Minister Narendra Modi on Monday indicated that his government may bring in a legal framework under which doctors will have to prescribe generic medicines, which are cheaper than equivalent branded drugs, to patients.

Modi said his government brought in a health policy after 15 years and capped the prices of medicines and stents, which has angered some pharmaceutical companies.

Speaking at the inauguration of a charitable hospital here, he exhorted the wealthy people to come forward and contribute towards health care of the needy people.

This country has not been built by the kings and leaders alone but by the power of the people, he said.

"Doctors write prescriptions in such a way that poor people do not understand the handwriting, and he has to buy that medicine from private stores at high prices," Modi said.

"We will bring in a legal framework by which if a doctor writes a prescription, he has to write in it that it will be enough for patients to buy generic medicine and he need not buy any other medicine," he said.

"In our country doctors are less, hospitals are less and medicines are expensive. If one person falls ill in a middle class family, then the financial health of the family gets wrecked. He cannot buy a house, cannot conduct the marriage of daughter," he pointed out.

"It is the government's responsibility that everybody should get health services at minimal price," the PM said.

"Earlier, the health policy was brought when Atalji (Atal Bihari Vajpayee) was the Prime Minister. Nothing happened in between (in health sector), which I have to do (now)," Modi said targeting the previous UPA government led by the Congress.

"When I was in Gujarat, I used to attract the wrath of many (by my decisions). Now when I have gone to Delhi, I have been instrumental in making many people angry, everyday I do some work which makes some or other person sulk," he said.

"See these companies which are manufacturing medicines, they used to charge Rs 1,200 for an injection. We called everyone (pharma companies) and ensured that the prices are reduced.

"The prices of 700 medicines were capped so that poor people get medicines at reasonable rates when they face grave diseases," Modi said.

"We have also capped the prices of stents used in heart ailments," he said.

"We have done this work, and you can imagine how angry the manufacturers of medicines will be. Despite the wrath of a very powerful lobby, the government is taking one step after another so that poor people and middle class get quality health services," the prime minister said.

He said the government has implemented the 'Pradhan Mantri Jan Aushadhi Pariyojna', where people get generic medicines from stores at reasonable rates.

Modi also stressed on preventive health care saying if people adopt it, they will not have to visit hospitals.

"Preventive health care is very important. My Swachhta Abhiyan (cleanliness campaign) is aimed at preventive healthcare as it has been proved that many diseases are contracted if we live in an unclean environment," he said.

"Yoga is also very important for wellness and I am running a campaign to make it popular across the world," he said.

He exhorted the well-off people to come forward and provide health care to the poor and middle class people.

"We require a jan andolan, jan shakti to provide effective healthcare to every person in the country," he said.

"'Seva permo dharma' has been the motto of our people," the PM said.

"You tell me the dharmshalas outside every important pilgrim town, were they built by the government? Who used to build wells and lakes in villages? Did the government build it? he asked.

He had also laid the foundation stone of the hospital when he was the Chief Minister of Gujarat.