Speaking at an Assocham event, Modi said the recent cut in corporate tax has brought rates to all-time low for businesses, adding that labour force should also be taken care of. 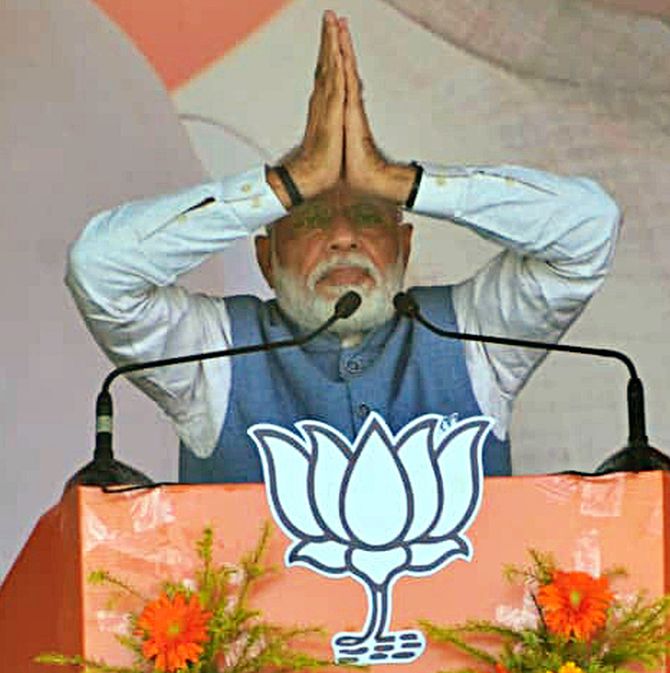 Prime Minister Narendra Modi on Friday said the Indian economy has the resilience to reverse the current slowdown and return to high growth trajectory and exhorted corporates to take bold investment decisions to help push up GDP growth.

Modi highlighted his government's decisions such as decriminalisation of corporate offences and promised them that "no inappropriate action will be taken on genuine corporate decisions".

Speaking at an industry chamber Assocham event, he said a massive Rs 100 lakh crore will be spent in the coming years on building infrastructure and another Rs 25 lakh crore on rural economy and this in turn will help nearly double the size of the Indian economy to $5 trillion by 2024.

"I am fully aware of the discussions happening around (current economic slowdown). I don't challenge comments made on it. I try to take away positives from such discourse," he said.

He went on to add that economic growth had fallen to 3.5 per cent in one of the quarters during the previous Congress-led UPA regime with headline consumer price inflation hovering at 9.4 per cent, core inflation at 7.3 per cent and wholesale inflation at 5.2 per cent while the fiscal deficit had widened to 5.6 per cent of the GDP.

During the tenure of Modi government, GDP growth has fallen for six consecutive quarters to a six-year low of 4.5 per cent in July-September 2019 amid slump in manufacturing and declining consumption.

"I don't say why some people were silent when GDP growth rate slipped quarter after quarter," he said.

"These kinds of ups and downs (in economic growth) have been seen in the past but the country has the potential to come out of these circumstances," he said exuding confidence of returning to a high growth trajectory.

The prime minister highlighted that India climbed from 142nd among 190 nations on the World Bank's ease of doing business ranking to 63rd place in three years and noted that India is among the top 10 nations which have in the last three years made continuous improvement.

"This hasn't come without having to face anger and allegations from people," he said.

"We have been told that we are corporate agents. But we are agents of 130 crore Indians."

He said many provisions of Companies Act have been decriminalised and more amendments will follow.

Also, companies facing failures have been given exit routes in the insolvency and bankruptcy code (IBC), he said.

These decisions will help in safeguarding the corporate world and its capital, he said.

“I want to assure banking and corporate world that we have been able to overcome weakness in the system to a large extent. And so they should now take bold decisions fearlessly, invest boldly and spend undauntedly."

"I want to assure no inappropriate action will be taken in case of genuine commercial decisions," he said.

He, however, said the interest of the labour force should also be taken care of.

Modi said the time taken to register companies has been cut to few hours from months and better infrastructure has enabled the cut in the turnaround time at airports and ports.

Dynamic changes have been made in the Goods and Services Tax (GST) on the suggestion of trade and industry, he said.

"We are not afraid of any challenges."

India received highest foreign direct investment during the last five years and its global competitiveness has improved, he said adding the country has the third-largest start-up ecosystem in the world.