IMAGE: Prime Minister Narendra Modi and the President of the Republic of Korea, Moon Jae-in at the inauguration of the Samsung manufacturing plant, in Noida, Uttar Pradesh.Photograph: Courtesy, PIB

The new plant will help the company raise its capacity in a phased manner, from 68 million units at present, to 120 million.

The company also launched ‘Make for the World' initiative, whereby it aims to export mobile handsets produced in India, to overseas markets.

Prime Minister Narendra Modi on Monday said his government's pet 'Make in India' initiative has propelled India to become the world's second-largest manufacturer of mobile phones as the number of factories soared to 120 from just 2 four years ago. 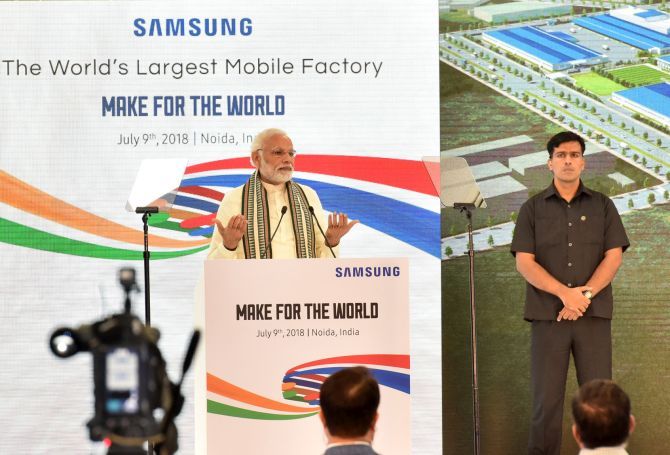 Speaking at the occasion, Modi said 400,000 direct jobs have been created as the number of factories making mobile phones increased.

“Today is an important day in making India a global hub of manufacturing," he said, adding that the investments in such factories are a cornerstone of India's economic and commercial engagements with countries like South Korea.

Indian economy, the fastest growing major one in the world, as well as a vast expanding neo-middle class offer unlimited opportunities, he said.

"Our push for Make in India is not just part of our economic policy but a commitment for bilateral ties with countries like South Korea," he said. 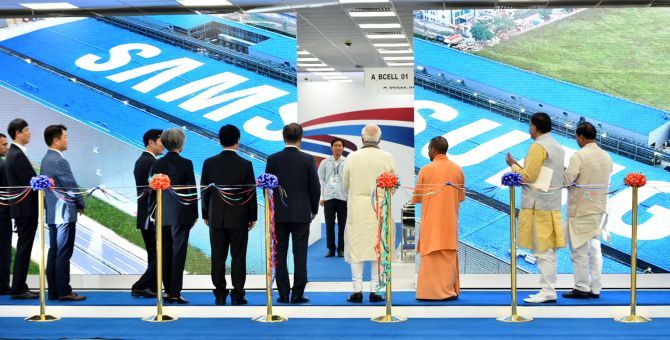 Number of factoring making mobile phone and its components have grown from just 2 to 120, with about 50 present in Noida alone, he said.

The country, he said, is marching towards a digital revolution with the availability of cheap internet data and fibre optic network reaching more than one lakh village panchayats.

Samsung India CEO HC Hong said: "Our Noida factory, the world's largest mobile factory, is a symbol of Samsung's strong commitment to India, and a shining example of the success of the government's ‘Make in India' programme. Samsung is a long-term partner of India.” The company is aligned with government policies and will continue to seek their support to achieve “dream of making India a global export hub for mobile phones,” he said.

In June last year Samsung had announced investment of Rs 4,915 crore to add new capacity at the Noida plant in Uttar Pradesh.

The government is procuring directly from producers using GeM (government e-marketplace) to the benefit of small and medium entrepreneurs, he said, adding electricity and water bill payments as also school/college admissions and PF and pension are available online. 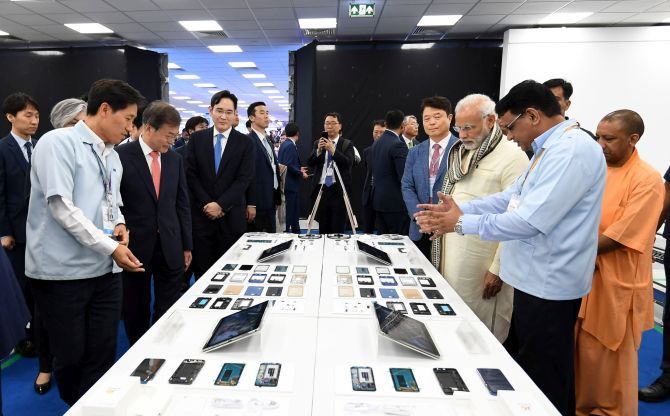 While about 300,000 common service centre have taken internet services to villages, free Wi-Fi hotspots in urban areas are giving wings for aspirations of poor and middle class, he said.

The factory, built by South Korean phone maker Samsung Electronics, will have the capacity to fabricate 120 million smartphones per year and make everything from low-end smartphones to the company's flagship S9 model.

Modi said 30 per cent of the phones manufactured at the factory, built at a cost of Rs 5,000 crore, will be exported.

Stating that Korean products can be found in almost all middle-class homes, he said Samsung is a world leader in the smartphone market.

Samsung, he said, had an R&D hub in India and now has a manufacturing base too.

Speaking on the occasion, Korean President Moon Jae In said Korean companies are taking part in the fast-paced growth of India and plant like the Samsung factory will create more jobs for Indian people. "2,000 new jobs will be generated in this plant," he said. 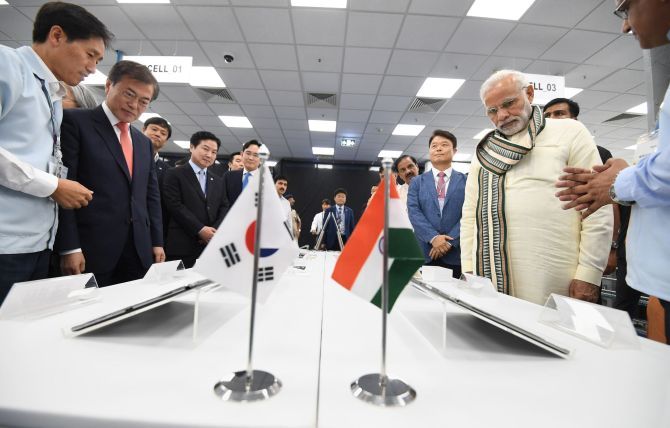 Stating that smartphones made at the factory will be exported to the Middle-east and Africa, he said Korean government will do utmost to provide all support.

India and Korea have complementary strengths, he said.

Set up in 1996, Samsung's Noida factory, is one of the first global electronics manufacturing facilities set up in India.

“A bigger manufacturing plant, spread over 129,000 sq metres, will help Samsung meet the growing demand for its innovative products and services across the country and also fulfil the company's goal of making India an export hub for the world,” Samsung said in a statement.

Presently all Samsung mobile phones, including its flagship Galaxy S9, S9+ and Galaxy Note8, are manufactured at its Noida plant.

Samsung has another manufacturing unit at Sriperumbudur, near Chennai, five R&D centres and one design centre in India. The two leaders, during the journey from the national capital to this town, exchanged notes and waived at commuters at stations en-route.

Modi was seen explaining finer points during the ride as eager commuters on stations waived and clicked pictures of the two leaders from their mobile phones.

Global phone makers are eying the world's fastest growing smartphone market, where shipments surged 14 per cent to 124 million in 2017.

It overtook the US last year to become the world's second-largest smartphone market after China.