Milk prices on the boil as farmers feel inflation heat 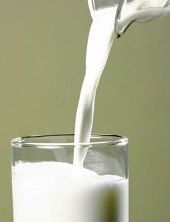 Milk prices are set to soar yet again, with milk sellers led by the Gujarat Cooperative Milk Marketing Federation resorting to a price hike.

GCMMF, which sells the ‘Amul’ brand of milk, has decided to raise the price of all Amul milk variants by Rs 2 a litre in the Delhi and Mumbai markets, with effect from October 15.

Joining Amul is a Mumbai-based private dairy, Parag Milk Foods, owner of the Gowardhan brand of cow milk, which has implemented a similar raise in prices.

“This year, an extended monsoon has led to the scarcity of dry fodder and therefore, fodder prices have overall increased by about 30 per cent.

"Further, there has been an increase of 15 per cent in the price of cattle feed since September 2012,” said R S Sodhi, managing director, GCMMF.

"But Amul milk prices have increased by only 10 per cent with the latest raise,” Sodhi said.

The new price of Amul Slim and Trim double toned milk will be Rs 30 a litre, compared to the existing price of Rs 28.

The increase will be effective from October 15

in New Delhi and Mumbai, which will be followed by a similar raise in other cities within a week.

However, in Gujarat, the price rise will be made effective only by the month-end, GCMMF officials said.

Besides the Gujarat, Mumbai and Delhi markets, Amul also supplies milk to Kolkata, Kanpur, Lucknow and Nagpur, among others.

Dairy experts noted that even after the price hike, milk was under-priced in the country. 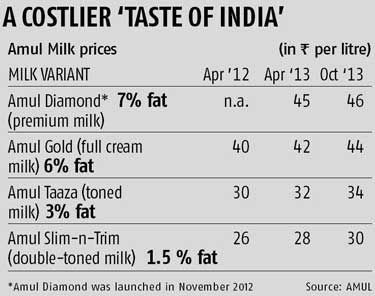 “Most of the private dairies in north India pay Rs 38 a litre to farmers, while Amul pays around Rs 35.

And we sell at around Rs 42 a litre. Even after a price hike of Rs 2 a litre, dairies will make a loss of Rs 2-4 per litre,” said a dairy source from Dholpur in Rajasthan.

“The prices have been increased from Dussehra in the Mumbai market,” said Devendra Shah, promoter and chairman of Parag Milk Foods.

He, however, admitted that there is definitely pressure on dairies to hike milk prices due to a host of reasons including rise in inflation as well as diesel and fodder prices.

“Although we are not increasing prices immediately, we may assess the situation after two to three months,” Chandramogan added.
Kalpesh Damor & Rutam Vora in Ahmedabad/Vadodara
Source: